JCPenney Gets The Finishing Touches 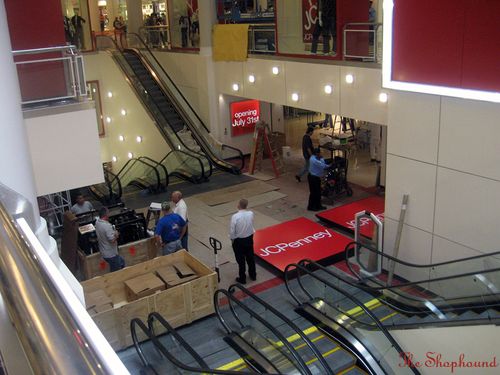 Next Friday, JCPenney will become the third department store to inhabit part of the shell of what was once the mighty Gimbel's on Greely Square (yes, that's the block just below the somewhat more famous Herald Square). 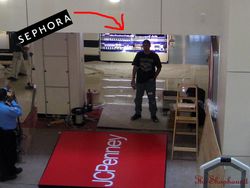 There's no hiding behind plywood for the store now, as visitors to Manhattan Mall can now peer down the atrium into what appears to be a mostly underground store. A peek to one side reveals the black and white striped walls of what will be the Sephora cosmetics concession, conveniently located near the entrance, while across the way, it looks like racks of clothes are already set up.
We still can't quite figure out the layout of this store. Obviously, it has consumed the two lower levels of the mall (goodbye food court!), and so we are concerned that this will create some kind of claustrophobic dungeon like the Penn Station Kmart. It hardly seems possible that the folks at Penney's would want to make anything less than a major splash with their first Manhattan store (They are from Texas, after all), but we can't help thinking that this might be some kind of puny underground JCPenney store. It even seemed like the A&S (and later Stern's) which was part of the mall's original Post-Gimbel's incarnation as A&S Plaza was bigger than what Penney's will open. 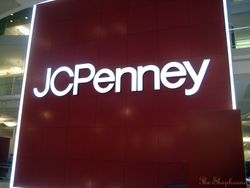 Today's WWD confirms that the 150,000  square foot store is smaller than the typical Penney's unit, but executives found the massive amounts of foot traffic from the subway station too hard to pass up. Can they make a low-ceilinged silk purse out of a sow's ear of a physical location?
We hope to have our suspicions proved wrong. With all the wonderful things we have here in Manhattan, we are still strangely deprived of many of the useful, mid-range stores that most of America takes for granted. We are looking forward to finally getting a good look at the Ralph Lauren produced American Living house brand, among other things.
We must applaud JCPenney's bravery in choosing a site that has seen no less than three major department stores bite the dust, and we are anticipating seeing just how they plan to beat their previous inhabitants' curses.

It really weirds me out that JCPenny owns Sephora... I like both of the merchants but prefer to keep them separate... I don't like superstores! Which is why I shop mostly online through Ebates and get cash back at both.

JCPenney does not own Sephora. It is a joint venture between JCPenney and Sephora.