Truckoads Of Gucci At DSW 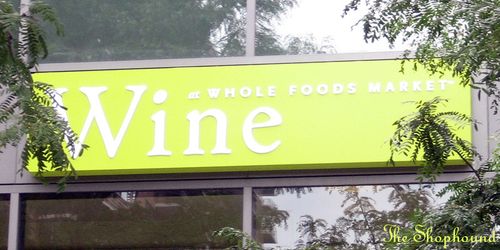 We are probably ore excited than most about the uptown Whole Foods Market opening in a couple of weeks or so mainly because it is but a stone's throw from The Shophound HQ. Having said that, we can report that the Columbus Square location will succeed where the Bowery branch was thwarted and Columbus Circle was forced to remodel: It will have a full Wine Shop, the only one in the city at the moment. See below for some fuzzy pictures that show it is being stocked as you read this.
Shoppers will remember that the Union Square store was forced to close its wine department due to some stupid regulation about where its entrance was, and the Bowery location was never granted its license, forcing the chain to rethink and make what would have been a wine department into a beer shop (which may have turned out to be more appropriate and lucrative for the neighborhood anyway).
As for the rest of the store, we can't see too much inside, but there appear to be plenty of check out registers (a priority for Whole Foods in NYC) and the layout looks to be a bi-level set-up similar to the one in Union Square with some departments upstairs, but much of the store on the lower levels. We are keeping our fingers crossed for a Pommes Frites counter, but we really don't know yet what this store's special features will be.
In advance of the August 27th opening day, the store will be hosting a sneak peak on Monday evening the 24th with a $15 admission to benefit Riverside Park Fund, the non-profit organization dedicated to conserving, improving, and beautifying the park along the Hudson River. Interested parties can RSVP HERE.
Whole Foods Market 808 Columbus Avenue at 97th Street opening August 27th, Upper West Side