East Side Bounces Back:

Madison Avenue Gets Ready
For Newcomers 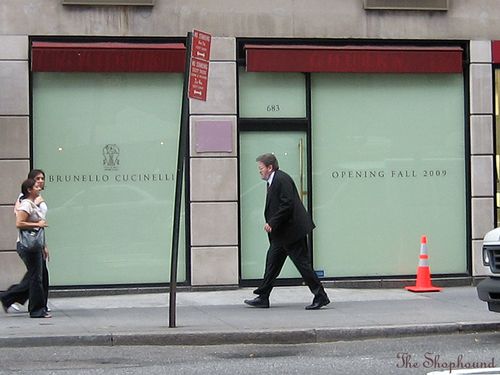 We have all been watching some favorite stores' departures, leaving some prominent gaps high profile locations like Madison Avenue over the past year, but now that rents fallen accordingly,  new settlers have come to fill at least some of that conspicuously empty space.
Above, see Brunello Cucinelli's future home at 683 Madison, a prime location once occupied by Ghurka, which is now ensconced in the basement of the Plaza Hotel. We always thought the Italian cashmere expert was far better suited to this uptown shopping strip than to its debut location on Bleecker street (though that store will remain). It is not far from Devi Kroell's shocking pink plywood which should be unveiled later this fall.
At the corner of 67th and Madison, Creed fragrances will be returning to the Manhattan retail scene after a moderate absence. Though touted as the perfumer's first freestanding American boutique, sharp-eyed shoppers will remember that Creed had stores here not very long ago that were converted to Bond no.9 shops by its American distributor, who wound up going into business for itself and jettisoning the Parisian brand. This new store would appear to be company owned. 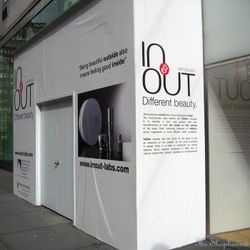 Further up Madison, the block between 77th and 78th Streets is getting two new additions.
In&Out is a Swiss beauty company that promotes a holistic "inside and outside" beauty regime including combinations of nutritional supplements, essential oils and cosmetics. They will be launching in the U.S. with their first freestanding boutique at 1007 Madison right next to Missoni.
A few doors down the block, signs point to "The Track & Field Store" which certainly sounds like an unlikely addition to the posh Upper East Side —unless pale-vaulting has suddenly become the latest fitness craze without anyone telling us (or maybe it's running underwater, as the slick signs in the windows would suggest). There is less information to be found about this venture, so if anyone out there knows more about it, drop us a line. 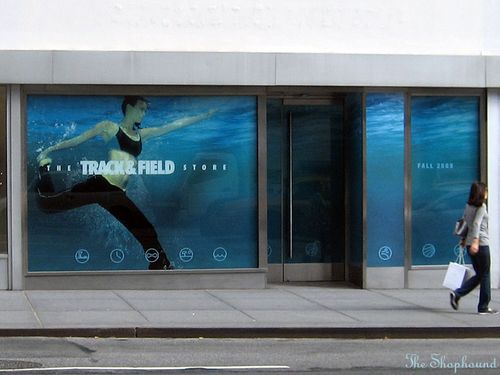 Track & Field is a very cool brazillian fitness store. Check it out http://www.trackandfield.com.br/tf/