Varvatos vs. Varvatos Next Week

Superdry Not Going To Tower
—Taking Canal Jeans Spot Instead 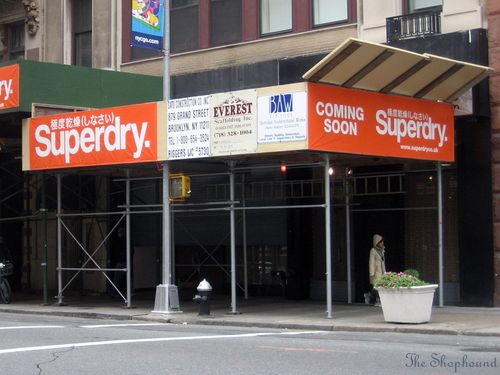 Now that we are back in New York, we can see for ourselves that the British Abercrombie clone sportswear label Superdry is not in fact taking the former Tower Records space. We assumed as much since it was reported that they were coming to Broadway at West 4th Street. In fact, they are taking a spot a block north of that where Washington Place hits Broadway —a space that housed Canal Jeans Co. after it left SoHo a few years back. Thanks to a commenter who gave us a heads-up. Interestingly, the folks at Superdry also left a comment, but rather than clarifying the upcoming store's address, it instead promoted their Twitter and Flicker pages.
Nice to see that they're using the Google.
They just don't seem to be paying much attention to what it says.
Meanwhile, The Tower Records corner remains sadly, conspicuously available.
Previously:
NoHo News: Superdry To Finally Take Tower Records Space?