Return To The Scene:

+J Throws UNIQLO For A Loop

Quick On The Job Edition 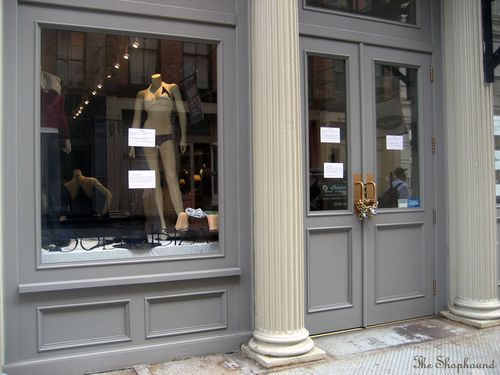 Just as Greene Street's long empty spaces are starting to fill in, another independent boutique feels the sting of the economy. We have to admit that we have never paid a great deal of attention to Sol de Ibiza at no. 52, which appears to have been a perfectly nice little swim and sportswear boutique. Perhaps being too innocuous was part of its problem, because as we walked past it yesterday, we were struck by the shiny chains on the doors. Also there were the multiple notices in the windows announcing that the landord had retaken the premises and its contents, and informing the shop's owner that should she attempt to enter the premises, she would be arrested for trespassing.
Ouch!
Inside, the darkened shop appeared to be ready for business with full racks of merchandise, suspended in time until some resolution to the situation is reached.
At some point, there will probably be a very good sale there, and at the moment, its website appears to be up and running, but at the moment, Sol de Ibiza está brillando no más.
Sol de Ibiza (Official Site)

Sol de Ibiza is open again and with a great new fall collection!