Isabel Marant Coming To SoHo
With Husband In Tow

Little abercrombie Gets Switched To A Hollister 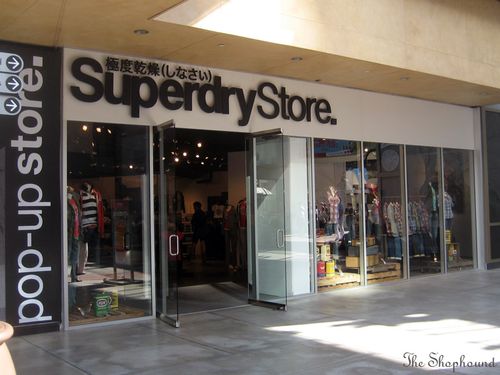 Last week, RACKED told us that British sportswear label Superdry was heading to NoHo at West 4th and Broadway, so we went all the way to Hollywood to see what this brand is all about.
Aren't we dedicated?
It turns out that the only Superdry store in America is at the Hollywood & Highland shopping complex right next to Graumann's Chinese Theater. Yes, that's basically in L.A.'s version of Times Square, but since everyone should go there at least once (if only to see how tiny Olivia de Havilland's feet were) we stopped in to check out the store, which is in a temporary spot until a better location in the mall opens up.
What we found was a sort of Abercrombie-ish sort of line with a touch of Japanese by way of Great Britain. Frankly everything we saw would have been greatly improved by removing the huge labels and logos, but perhaps this brand is simply not that adventurous
In other words, nothing terribly groundbreaking, but plenty that should sell easily to the tourists and NYU kids in the neighborhood. The staff was charming and pleasant, so points to them for that, but if you are coming all the way from England, we would like you to bring something more than plaid shirts, cargo shorts and rugby tops. We got plenty of that already. On the other hand, it will be nice to see that Tower Records space filled, since that whole Steve & Barry's thing obviously didn't work out.
Superdry 6801 Hollywood Blvd, Hollywood
Storecasting: Superdry Brings a British Take on Japanese Style to NYC (RACKED)

It isnt taking tower records spot.... They have a big banner that says coming soon next to the mcdonalds close to astor place..... The tower records is still vacant. The store is due in november.....

Upload pictures of yourself wearing Superdry to the Superdry flickr group- http://www.flickr.com/groups/1200101@N25/

I particularly enjoyed your trip to Superdry although it was not as interesting for you i know. Because of these things I have turned myself to online shopping and never found Japanese brands in search of English brands. I usually prefer to go Wholesalepages.co.uk and nextdaystock.com as they always keep exclusive and up to date fashion designs and accessories.