How Long Would We Stand In Line For A Free Shirt? 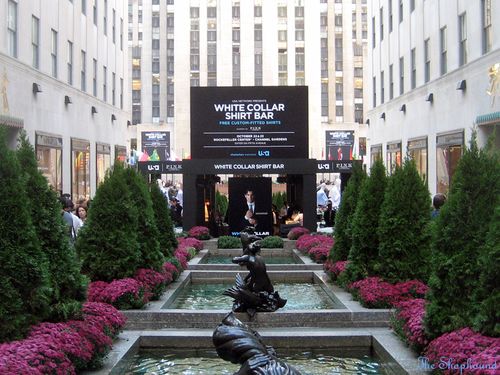 Longer than we thought, it turns out.
USA Network is undertaking what must be a staggeringly expensive promotion for its new original series, White Collar which premieres Friday night October 23rd at 10 PM. The network is giving away free white shirts for men and women from Thomas Pink to those who are willing to line up at the White Collar Shirt Bar that has been set up in the middle of Rockefeller Center's Channel Gardens. Customers are not simply being handed shirts and sent on their ways. They are measured and fitted individually, and will receive a correctly sized shirt via FedEx within 10 days.
We had two options at 2:30 in the afternoon on Thursday. One was to come back at 8 AM on Friday morning to get the jump on the next day's crowd. The other was simply to get in line right then and there. We were told that the wait would be about two hours by the cheery young lady who was part of the event staff, all of them dressed in white Pink shirts, black pants, black fedora hats and cobalt blue ties that matched the piercing eyes of White Collar star Matt Bomer who was smirking down at the entire affair from posters, banners and portable DVD players all over the place. 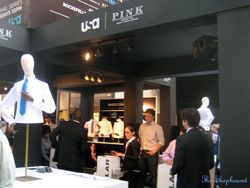 Since it was a lovely afternoon, and The Shophound had an iPod full of podcasts, we decided to just get in line and stick it out. Generally, those waiting in line were calm and well behaved, resigned to a few hours of hanging around with zen-like calm. Of course, by the time we discovered that two hours was a rather optimistic estimate, we had already invested too much time to ditch the whole thing entirely. Dammit, we were going to get our shirt, and so we persevered for nearly three hours, and after a couple of "This American Life"s and some "Fresh Air"s, we ordered a classic dress shirt with double cuffs in an elegant herringbone textured cotton (a $180 value according to the Thomas Pink website). Men are offered the options of classic, slim or formal pleated styles. We detest waiting in lines, but we still think this is a pretty good deal. You can never have too many perfect white shirts, especially if they are made in England and also free. 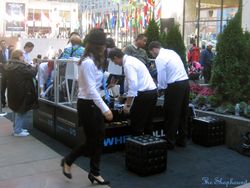 This stunt is costing the network at least a couple hundred thousand dollars in shirts alone, and that's not even counting the free shoeshine and coffee bars or any other expenses. We're putting the price tag on this event at about half a million, and that might be lowballing it. Is that a lot of cash to promote the début of a basic cable series? We have no idea. It may be a bargain to NBC Universal.
For those of you who missed out on today's free-for-all, it will be repeated on Friday the 23rd from 8 AM to 6 PM, though if the crowds are anything like they were on Thursday, you can expect that the line will be closed at about 4 PM or possibly before, so you really can't get there too early. We recommend comfy shoes and good, working headphones.
White Collar Shirt Bar Rockefeller Center Channel Gardens, 49th Street at Fifth Avenue, Thursday October 22nd, 10 AM-6 PM Friday the 23rd, 8 AM-6 PM