Beyond The Pumpkin Patch:

Is Gucci's Sneaker Pop-up A Bust? 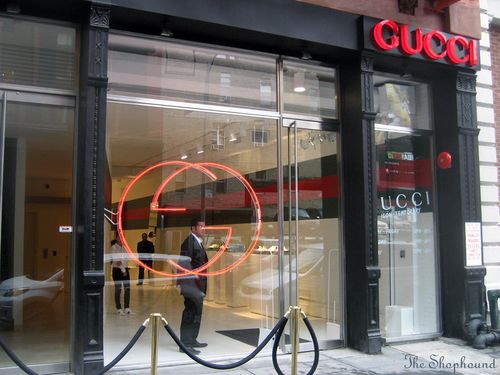 As you can see from the picture above, Gucci was prepared with velvet ropes for the hordes of people that were expected to descend upon opening of the heavily promoted Gucci Icon-Temporary store in SoHo last weekend.
So where were they?
When we stopped by the Crosby street store last Saturday at around Noon, there was not a soul in the place, let alone anyone waiting outside, except for the properly decorous staff, smartly turned out in crisp white shirts. So what went wrong? Was it the weather? Though it was gloomy, there was hardly the kind of rain that would keep an enthusiastic shopper home on a Saturday. Perhaps confusion over the opening caused problems, as Gucci had earlier announced last Friday, not Saturday as the opening day. Was it location? While Crosby Street is just off the beaten path in SoHo, it's hardly so obscure that people wouldn't notice the big neon Gucci signs behind Bloomingdale's (though the Meatpacking District would have been a far better choice).
Maybe it's none of the above. Perhaps the folks at Gucci miscalculated when they thought that in 2009 they should be centering a costly promotion around sneakers that sell for for more than $500 (including some styles going for up to $1400)  —superDJ Mark Ronson's participation notwithstanding. While the Gucci Icon-Temporary shop was set up to attract collectors, it appears that the luxury brand has limited clout among sneaker folk. After all, sneakers are hardly their stock in trade. Limited edition loafers? That might have attracted some interest, and made rather a bit more sense for the brand. Maybe a couple of years ago, when mindless extravagance was the order of the day, they could have whipped up more excitement among shoppers, but it's a different world now —and apparently a different Gucci. The shop itself is a well executed, crisp white interior, like the inside of an expensive shoebox, and Mark Ronson's boat shoe/sneaker hybrid, designed in collaboration with Gucci creative director Frida Gianini, is an interesting design, but most of the other styles look like Nikes or Adidas that have had their logos replaces with Gucci flair and perhaps a touch of alligator here and there. Apparently this is not enough to get the same masses who will spend hours in line in front of A Bathing Ape for every new release.
Perhaps things will pick up over the next two weeks of the shop's appearance. Maybe Miami, the store's next scheduled stop, will be more receptive to the merchandise before the whole affair heads off to London and Tokyo and other international destinations. If the rest of the world seems to be as underwhelmed as New York, however, this might be a good opportunity for the folks at Gucci to ponder exactly what they think their label is supposed to stand for.
Gucci Icon-Temporary Crosby Street between Spring & Broome Streets, approximately through November 7th (?)

I went in on Sunday and it was rather busy. A lot of styles were sold out/close to selling out or at least they were telling customers that. I think that the true sneakerheads and rich euro crowd will clean this store out. If you have 500 to spend on regular Gucci sneakers, you'll go to crosby and get these limited edition fug city ones.