This Week In UNIQLO:

A Heattech Party In Gramercy Park

SAVE FASHION To Make A Brief Return In SoHo

In Which We Are Further Annoyed
By Barneys & Cartier 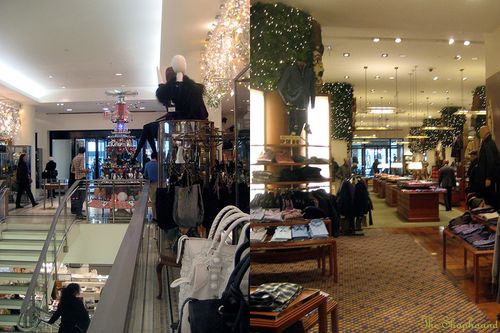 We are not really given to ranting that much over here at The Shophound, but last week we felt compelled to express our displeasure at seeing early Christmas decorations going up before Halloween at the Bloomingdale's flagship on 59th Street. Well, Halloween has just passed, but its still too early, and we were disappointed to see that both Barneys and Cartier are also jumping the gun.
Let's clarify.
We don't want to see Christmas trees and tinsel until we do, and not a moment before.
It's like seeing someone in a gorgeous winter coat in September. You know someone can't wait to wear this fabulous thing, but no matter how stupendous it may be, it's still ridiculously out of season. That's how we felt about Barney's main floor yesterday (pictured above). We are actually excited about their "Saturday Night Live" inspired Holiday theme, we just don't want to see it until it's time.
As for Cartier (below with Saks), their decorations are the same as they are every year, so what's the rush? They stick out like quite the sore thumb at the moment.
Saks Fifth Avenue gets a reprieve. Although they already have their animated snowflake light show installed on the Fifth Avenue storefront, it isn't turned on, and the main floor, as of yesterday, is still happily free of Holiday décor.
Of the big stores we surveyed this week, only Bergdorf Goodman remains untouched by Holiday Elves. Though their current windows, created in conjunction with Dell Computers, are incredibly lavish, they are not in fact the store's Holiday windows, as some other bloggers had assumed.
When will we be ready for Holiday decorations?
The week before Thanksgiving at the earliest
So to recap:
It's still too early for Christmas decorations.
Gold Star for Bergdorf's. ★
Booby Prizes for Barneys and Cartier. ☹
That is all.
Previously:
Today In Jumping The Gun: In Which We Get Annoyed By Christmas In October 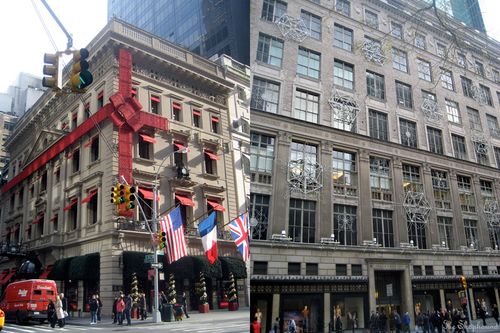 Posted at 11:49 AM in Barneys, Bergdorf Goodman, Department Stores, Saks Fifth Avenue, Things Not To Do, Windows | Permalink | Comments (1)

I saw Christmas decorations on a corner food cart in midtown yesterday!