eBay To Return To Midtown
—This Time For The Public 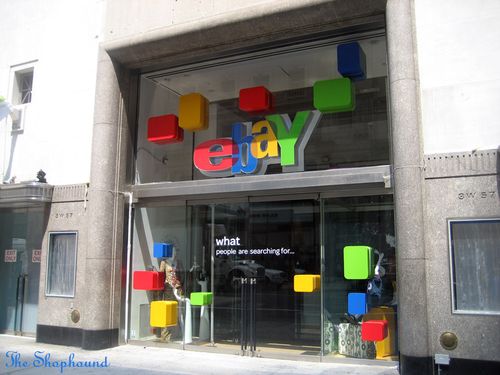 Earlier this year, eBay opened a pop-up store next door to Bergdorf's on West 57th Street that was accessible only to a select invited few and then vanished amidst curiosity from the public passing by.
It turns out that it was just a tryout of sorts for another run starting on this November 20th through the 29th. This time, the store is expected to be fully open to the public after the obligatory gala party on the evening of the 19th. In fact, the first 100 shoppers to enter the store on Black Friday (November 27th) will receive special "daily deal" items. The selection of merchandise on hand will reportedly include assortments from Norma Kamali’s exclusive eBay collection, L.A.M.B, Michael Kors, Dooney & Burke, Anthropologie and various cosmetics and fragrances brands. The entirety of eBay's offerings will be made available through internet kiosks and handheld tablets, while the company will match up to $200,000 spent in the store in support of various charities including Global Giving, Grammy in the Schools, Oxfam America, Right to Play, Save the Children, Share Our Strength, St. Jude Children’s Research Hospital, Starlight, Toys for Tots, U.S. Fund for UNICEF and YouthAIDS EBay.
Fashion Scoops: eBay's Holiday Spot (WWD)
Previously:
Pop-Up Mysteries: What Is eBay Doing On West 57th Street? part I and part II