In Which We Actually
Eat Breakfast At Tiffany's 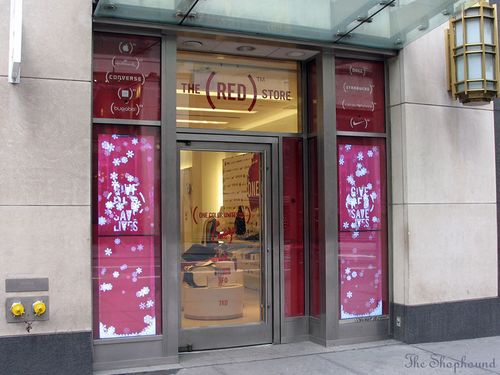 We know that the Gap has been working with the (PRODUCT) RED program for quite a while with its own collection that benefits The Global Fund to Fight AIDS, Tuberculosis and Malaria.

To remind everyone about the charity driven product lines, the Concept store at the Fifth Avenue flagship has just been converted into The (RED)™ Store featuring not only its own products, but also those from most of the other companies that participate in the program, including Emporio Armani, Converse, Nike, Apple, Hallmark, Dell, Bugaboo and even Starbucks. The centerpiece of the store, of course, is the Gap's newest collection of artist designed t-shirts benefitting the program including the latest one designed by Stella McCartney ($28 above left).

We also found sunglasses and watches from Emporio Armani, the latest iPod Nano, skateboards from The Girl Skateboard Company and a special limited edition laquered silver "Hot Lips" ring ($1,500 at right) from Solange Azagury-Partridge.
We have to admit that we had gotten a little bit weary of the whole (PRODUCT) RED thing not because we didn't think it was worthwhile but because it seemed like nobody would make anything that wasn't RED.
Seriously, it's kinda limiting.
Thankfully, some of the companies have discovered that they can make at least a few things in other colors now, too, a refreshing update.
The (RED)™ Store at the Gap Flagship Concept Store, 680 Fifth Avenue between 53rd & 54th Streets, Midtown