In Which We Discover Yet Another
Online Sample Sale Site 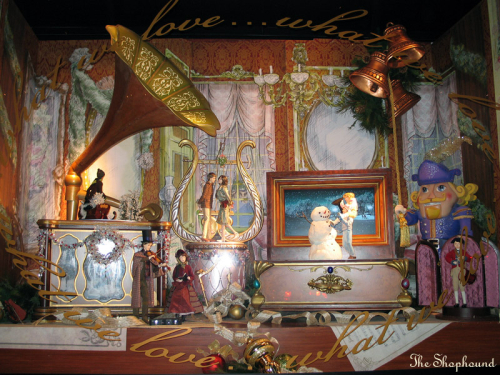 Perhaps no store has a more consistent style of Holiday windows than Lord & Taylor. Year after year, their displays are always intricate and meticulously detailed with lots of moving parts, usually including lots of figures in typically nostalgic holiday scenes. Of all the major windows, these are easily the most kinetic, sometimes featuring two or three different animations in a single window. This year, instead of featuring a story, the theme is, "What We Love", and if that sounds vague, it would explain the random combinations of Christmas-y vignettes featuring seemingly unrelated figures, often from totally different time frames, jumbled together. Here's a gingerbread house, there's a carousel and there's some skaters. One window seems to reference "The Nutcracker"...or maybe not. None of this seems to matter too much to all the little kids lined up to gaze, enthralled, at the many scenes of happy white folks celebrating.
Oh, wait a minute.
There's that.

Yes, all those figures do seem a bit more homogeneous than necessary. On closer inspection, we did find a very few caramel colored figures spinning in the upper reaches of two windows (left), but we couldn't really tell if they were meant to represent another race's complexion or just suntans. Nevertheless, we certainly hope that when planning next year's windows, they are able to inject a bit more diversity into the displays.
Lord & Taylor 424 Fifth Avenue between 38th & 39th Streets, Midtown.
Click HERE for a slideshow featuring a closer look at the windows.