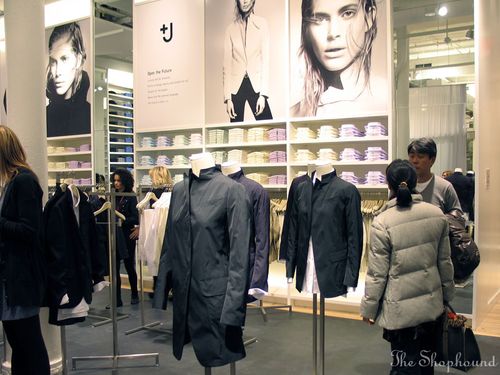 Pictured above is what you will see if you have decided to wake at the crack of dawn this morning to get the first shot at the first Spring 2010 delivery of UNIQLO's +J collaboration with the designer Jil Sander. After last Fall's blockbuster debut, this is one of the few times you will see of the line before it has been ransacked by eager customers. Unlike last season, there have been few preview images posted, so last night's press shopping preview was the first chance most of us got to see the collection up close (We also got wine and hors d'ouvres as well as a crew of attentive salespeople that could rival any luxury store and kept the merchandise meticulously folded, not that we would gloat or anything). Could it live up to last season's stellar standards? Yes and then some.
As we expected, the sheer drapes have been moved to a side of the main floor providing lots of shelves, big mirrors and easy dressing room access. The staff had even placed empty t-stands in strategic spots where shoppers could drape their coats and bags while they slipped on a jacket. The insider-y VIPs were loading their arms in much the same way they did last October. Among them were Richard Lambertson, who told us that the first Lambertson Truex for Tiffany & Co. leathergoods line will be shown to press in April and hit stores in September, but we digress...
The collection has been expanded, so this delivery is only the first of three to be spread throughout the next few months. There's more minimalist basics that everyone liked so much the first time around recast in lighter colors and high tech synthetic and cotton fabrics that have replaced last Fall's lofty woolens. This delivery highlights jackets and coats ranging from tailored blazers to anoraks and lightweight down filled pieces that are ready to be worn right now for instant gratification. We tried on nearly every single men's jacket, and each one fit better than the last. Standouts include a surprisingly flattering, lightweight down shirtjacket in peacock blue (really!) and series of sporty cotton twill jackets with military inspired details. Women will find corresponding pieces as well as separates in pastel techno fabrics.
If there is one caveat it's that the size scale remains as frustratingly restricted as last season, topping out with Larges that are more like Mediums. In fact, many of the staff will commiserate with you, admitting that they had just as much trouble fitting into the clothes themselves. One associate suggested to us that the sizing complaints had indeed made their way back to the people who make decisions about such things, so hopefully the future will see some correction.
It it worth it to get up early and stand in line? Regular Shophounders will know we are UNIQLO's biggest fan, but we loathe waiting in a line on the sidewalk. If you allow yourself to queue up just once this year, however, this would be the time. In this case, the sequel looks even better than the original.
UNIQLO's +J Launch at 546 Broadway, SoHo opening at 8 AM thru 1/16, 9 AM on 1/17
Previously:
Collaboration Anticipation: Another Peek At +J Spring
Collaboration Anticipation:UNIQLO Prepares For +J Redux Next Week
More images after the jump 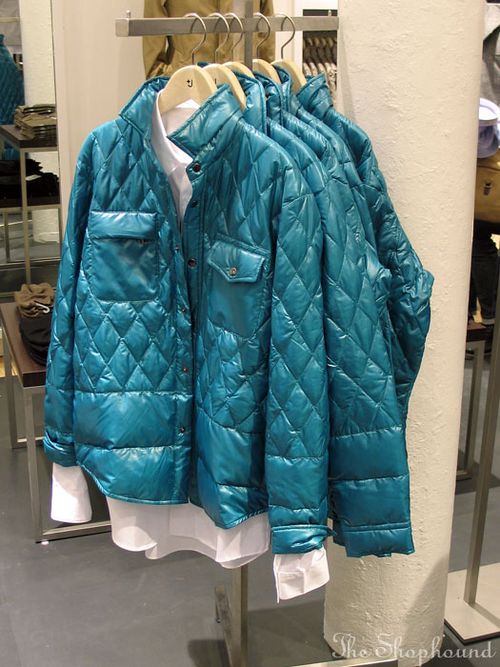 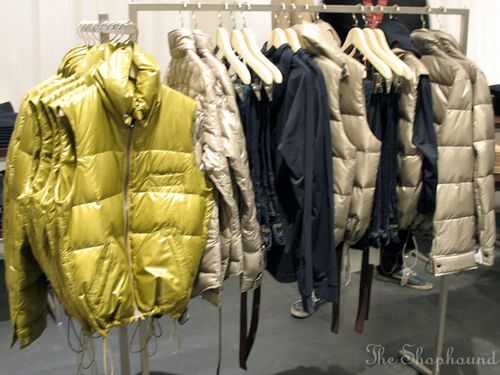 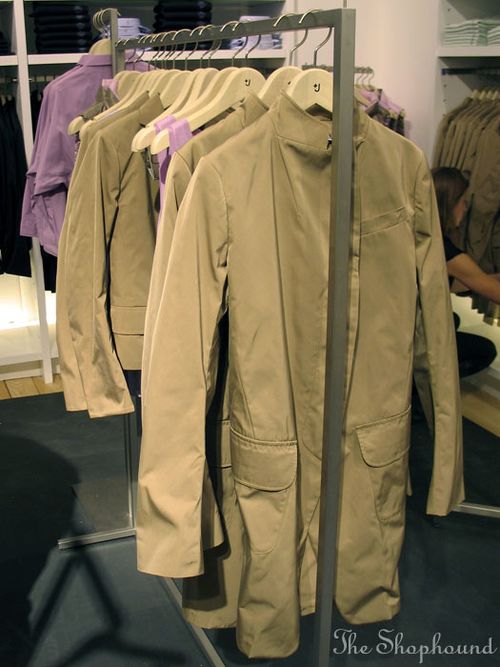