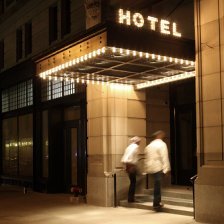 Now that the holiday season is done with, we have been waiting for some exciting news to get things back into gear, and RACKED has a doozy of an item.
Opening Ceremony, officially the "Best Store Ever" in the minds of so many city shoppers these days, is opening a satellite branch in the ACE Hotel at 29th and Broadway.
This juicy bit of news was found buried in the January edition of the Flatiron Newsletter. Reportedly, the retailer will take 1,500 square feet along the Broadway side of the hotel's street level, making its fourth fully fledged branch after Tokyo, Los Angeles and the original Howard Street store in SoHo.
This will be in addition to an already announced branch of the Lower East Side's Project No. 8, which will be taking 750 square feet along 29th Street, as well as couple of restaurants.
Opening Ceremony has a penchant for the slightly offbeat location, having done wonders for a formerly dreary corner of Howard Street. While this new spot can be charitably called part of the Flatiron District, we can't help wondering what kind of effect the über-directional boutique will have on the otherwise unremarkable midtown blocks just south of Manhattan Mall and Macy's in February, when both stores are expected to open.
Opening Ceremony To Join Project No. 8 At The Ace Hotel (RACKED)
The Ace: Playing With a Fuller Deck (Flatiron 23rd Street Partnership Newsletter)
Opening Ceremony (Official Site)

Can't wait! That area is pretty boring and could use an injection of fashion.