Gucci Looks Back And Sets Prices

Dsquared2 Gets Thrashed And Pummeled For Fall 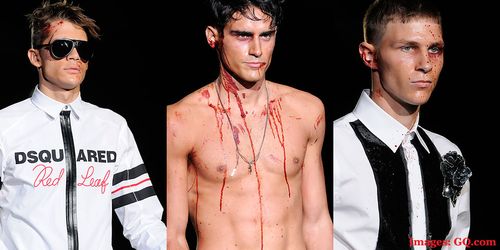 Was it just yesterday that we mentioned that the Men's Fall 2010 collections in Milan were looking dull and gray? Well, they are, but there are a few exceptions. It's been a few years since we got over our obsession with all things Dsquared2, but we have still found their runway photos consistently entertaining. Usually, they can be counted on for stellar model casting and styling —creating an always diverting parade of mostly fresh faced, occasionally trashy and often scantily clad hunks.
But not this season.
This time around, they have chosen to style their models to look as if someone took a 2X4 and smacked the shit out of them before they hit the runway.
It's different, no?
Bruised and blood-spattered, that's the look for next Fall, with models sporting all manner of black eyes, bloody noses and various other lacerations. And at the end, the designing Caten twins sported matching surgical gowns featuring little pink triangles and sprayed with blood, like a pair of cheery, little, gay, vivisectionists (Oh, and that's not a lady between them in the picture. It's Tokio Hotel lead singer Bill Kaulitz.). Perhaps they are making some kind of sophisticated intellectual statement, but let's face it, it's Dsquared2, and they have never exactly been seen as deep.
There are just so many different kinds of wrong going on here that we can't even begin to list them, as if the studded leather hockey jersey isn't enough to be upset about.
Definitely not dull and gray though.
It's probably good that they didn't invite Rihanna this year.
Dsquared2 and other Men's Fall 2010 collections can be viewed a GQ.com in new, crisp full-screen mode 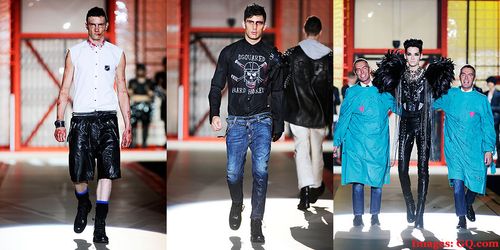