Nordstrom Rack Has An E.T.A. 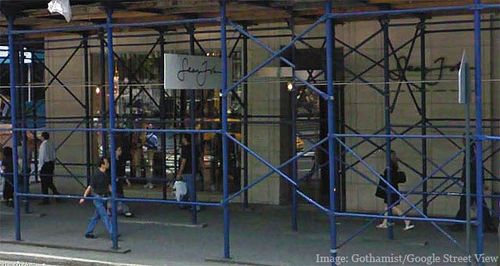 Expect to hear more about this little tiff as it develops.
The artist known variously as Puff Daddy, P. Diddy, just plain Diddy and Sean Combs is suing the landlord of his Sean John shop on Fifth Avenue because his store has been obstructed by scaffolding for three years.
That's THREE YEARS of scaffolding.
Who can blame him?
His suit reportedly claims that the obstruction has sent his store's sales spiraling 50% downward. Of course, we will never know exactly what sales would have been without the scaffolding (there was that little thing called The Recession that happened, remember?), but we applaud his efforts to get rid of this sidewalk scourge.
While it can be an opportune shelter in the event of a surprise downpour, scaffolding is generally a nuisance for everyone, We were always under the impression that buildings were not allowed to keep it up indefinitely, and would be forced by the city to remove it after a period considerably shorter than three years, but apparently we were mistaken.
We will be interested to see how this case affects other stores who are suffering under the camouflage of excessive, prolonged scaffolding. Should he succeed, Combs will be a hero to retailers all over the city.
Diddy Sues Over Scaffolding Outside His 5th Ave Store (Gothamist via Racked & The Cut)

I hate scaffolding! How is it possible that there are so many of them that have been up for up to 6-7 years in Manhattan, and you never see anyone actually doing any work on the buildings that are covered by them? Sometimes I think property owners put them up just to f**k their tenants over or to piss people off in general. Three years = ridiculous.