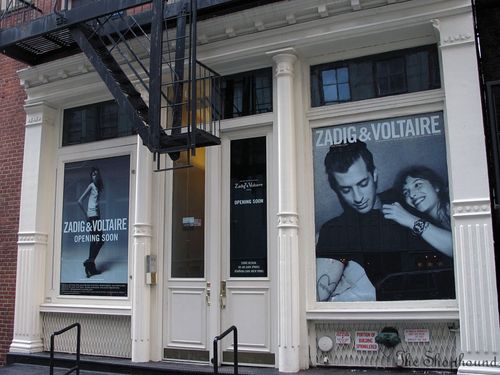 Whilst Holiday shopping last month, The Shophound made sure to include a trip to one of our favorite gift and home furnishing stores, Distant Origin, only to find that its Mercer Street location (at no. 153) had closed, making room for another branch of French sportswear chain Zadig & Voltaire, its third in the U.S.
We recall not being terribly impressed with Z&V when they opened their first New York store on Washington Street last April, but apparently they are doing well enough to expand, and will probably do just fine on that busy block of Mercer Street between Houston and Prince.
Sorry for our lack of enthusiasm. Perhaps we should give Zadig & Voltaire another shot, but we will be missing Distant Origin's particularly well chosen mix of furniture and gift items. Having been on Mercer for a couple of decades, they are now relegated to an upstairs suite on Broadway between Spring and Prince Streets. We hope they return to a street level shop soon.
Previously:
The Eurocasual: Zadig & Voltaire Hit The Meatpacking District
Distant Origin (Official Site)