J.Crew To Bring Men's
To Madison Avenue This Fall 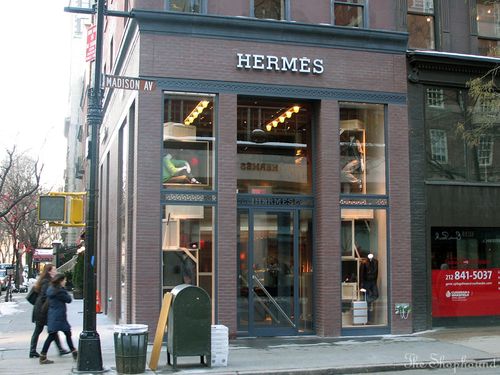 Usually, Fashion Week is accompanied by a flurry of store openings and refreshed retail activity, but this season, in a lagging effect of the recession, there are far fewer débuts on the docket. The standout is clearly Hermès' highly anticipated new men's store on Madison Avenue, located directly across the street from its flagship store.
We have been made very aware that this is the first Hermès store devoted exclusively to its men's products anywhere in the world, even before Paris. It's fairly obvious that the store was planned not so much because there was such a huge demand for menswear but because the luxury brand came upon an irresistible real estate opportunity when the Luca Luca store at the corner of 62nd street went dark and Madison Avenue retail space suddenly became not as precious as it had been only a couple of years earlier (This is not meant to diminish the store. For example, Bergdorf Goodman's highly successful men's store was conceived in the midst of a recession in much the same way).
The luxury brand has cleverly made the most of an unusual space with four not terribly spacious floors, creating the intimate effect of a set exclusive boutiques stacked atop each other. The facade of the townhouse building has been tweaked to create a dark, masculine counterpoint to the main store, subtly mirroring its architectural details, and customers enter to -what else?- abundant displays of Hermès' signature neckties. We are pretty sure that tie sales alone would be enough to pay the rent on this store, but climb the stairs to find an assortment of luxury sportswear. We were spellbound by a featherweight silk windbreaker the color of mud that was clearly never meant to see the inside of a subway or feel the pressure of a heavy laptop bag on its delicate shoulder. No, this jacket, priced at over $3,000, was obviously meant to visit hand-stitched auto seats. Longtime designer Véronique Nichanian deserves credit for keeping Hermès apparel from looking like expensive clothes for rich old men. They are expensive clothes for somewhat younger rich men, but the attitude is more sleek race-car driver than leathery shipping magnate on a yacht.
One more flight brings us an expanded selection of watches and more formal clothing and shoes priced at -oh, you don't even want to ask, and yet another floor contains an even more hushed salon devoted to custom orders.
It's not by accident that Hermès has survived the recession relatively unscathed compared to other luxury brands. The staff (many of whom were likely imported from across the street) have none of the overeagerness you usually find in a newly opened shop. They are welcoming but far from smothering, and for those skeptics out there, we can report that there was business being done on every floor. Did it appear to be mostly with foreign tourists? Yes, but a sale, as they say, is a sale.
Hermès Men's Store 690 Madison Avenue at 62nd Street, Upper East Side