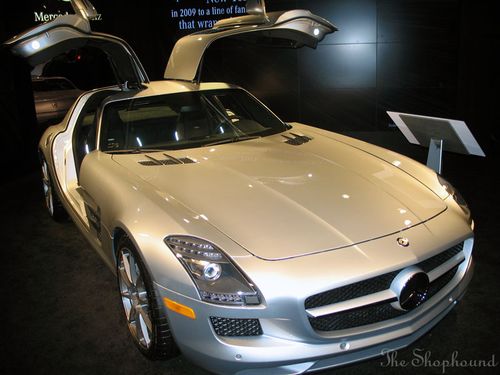 While the folks at Mercedes-Benz Fashion Week are doing their best to whip up some nostalgia for this last season at Bryant Park, but the activity at the tents has, in fact been a bit lackluster. Rather than a grand finale, its starting to feel kind of like the house you are in the process of moving out of when you have half of you stuff all packed up and it's starting to look empty. In fairness we must state that we haven't been hanging out much in them the way we once did mainly because there isn't much going on the way there used to be. The sponsor booths have been filled somewhat sporadically, and it looks like the days of the Havaianas Flip-Flop-Free-For-All are long gone. Even a promotion for Mariah Carey's new perfume failed to include what one would have thought would have been an obligatory appearance by the singer herself. We do, however get media alerts for events like a cast member from "The City" showing up at the TRESemmé booth for a few minutes to basically get her hair brushed. Because that's a story? The Chambord Chocolate Fountain, however, seems to be here for the long haul, and for that we are grateful a couple of times a day. Maybe the Lincoln Center move can't come soon enough. 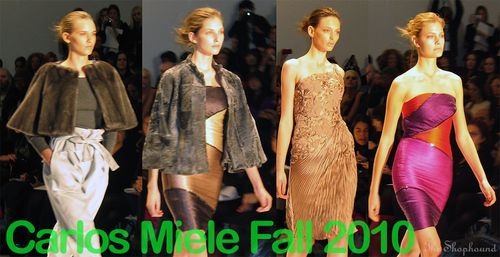 Monday started for us at CARLOS MIELE in the Promenade tent, whose first look was a silk cocktail dress in a geometric panels of ruched silk charmeuse that was about as autumnal as a hot day at the beach. That's not a criticism. It was, in fact, a refreshing sight whe snow was anticipated, and perfectly appropriate since the Brazilian designer's strength is eveningwear that is basically seasonless anyway. Miele wisely cut costs by having a celebrity-free front row, which made French Vogue Editor Carine Roitfeld's presence that much more significant. Later, "Gossip Girl" dad Matthew Settle showed up in the Promenade tent for PERRY ELLIS reminding us that most of the first row glamour this season has been provided by locals ("Gossip Girl" films on location in New York) He was joined by cohorts Jessica Stroup of "90210" and Robert Buckley of "One Tree Hill" for some kind of CW network trifecta as well as "Ugly Betty"'s Mark Indelicato and NFL Wide Receiver Terrell Owens, making him the rare pro football player willing to visit Fashion Week. The brand has been absent from the runways for a few seasons, and the crowd seemed eager to welcome it back In the past, Perry Ellis designer John Crocco has shown collections that really only "inspire" what winds up on the racks at Macy's. This season, however, it looks like he was working with fewer runway showpieces and more of what the moderate men's sportswear label actually produces. Was this the mythical luxury "Signature" collection that lives only on the runway? The leather pants would suggest so, but sometimes it was hard to tell. We're beginning to think it would be nice to see Crocco get a luxury line of his own so we could really see what he can do without the weird sort of smokescreen Perry Ellis shows its line behind.
One thing we do know is that there is a certain audience at Fashion Week who are more than happy to watch models like Garrett Neff and Sean O'Pry walk past no matter what kind of collection they are wearing.
The next day we reconvened for MAX AZRIA's big Tent show, his last of the season. Azria presents thre complete collections in the tents including BCBG and Hervé Leger along with his signature label, and it must be said that they are among the most flawlessly produced of anything to be seen. For a while, we wondered it the Azria collection wasn't a bit redundant, but lately it has taken on a more distinct image of its own, and this season it was about sleek, black geometric draping that was minimal and sophisticated. Azria has also not abandoned the front row tradition, and in this show he garnered the best of who was available in a dry season for stars. Leigh Lezark (who must be cleaning up in front row fees this season), Estelle, Melissa George, AnnaLynne McCord, Maggie Q, Maggie Rizer and volleyball champ Kerri Walsh all cozied up in a row, doubtlessly happy that Azria will still spare no expense in creating the perfect runway experience.