A HOUSE IN DECLINE:

Lohan Is Out At Ungaro,
But Not Before Madison Avenue Boutique Is Shuttered 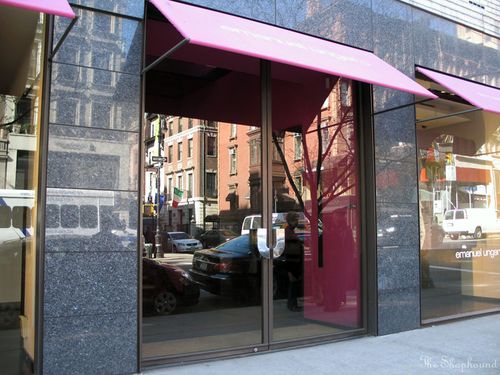 Yesterday, bloggers and journalists were tweeting incessantly about Lindsay Lohan's absence from the  Emanuel Ungaro runway show in Paris where she was supposed to be the "Artistic Director". Ungaro officials finally admitted that she was "not involved" with the collection, leaving current designer Estrella Archs to artistically direct herself according to WWD. Lohan's commotion causing appearances at several other designers' shows earlier in the week suggested as much, and the actress confirmed the news later in the day at the Kenzo show claiming that because of "legal things going on" she couldn't discuss it further.
It's not like any of this should come as a surprise to anyone, since her participation in last season's show turned the once celebrated house into a laughingstock, but we suspected that contracts were keeping the label from making an official announcement that they had separated themselves from the actress.
Back here in New York, there were rumors floating around about a month ago that the end of season clearance  at Madison Avenue's Emanuel Ungaro boutique was actually a store closing sale, though management denied it to inquiring press. Yesterday, however, The Shophound took a walk down Madison and stumbled across a darkened and empty Ungaro shop, so, yeah, the boutique is definitely toast.
Archs' latest Lohan-free effort for Ungaro is reportedly an improvement over her unfortunate début last November, but it remains to be determined whether or not she has the chops to overcome the past few years of creeping decline at the house. Perhaps its owners should cut their losses and let the label rest for a few years before reviving it (especially since hardly anyone is selling it anymore). After all, if a brand like Vionnet can be left dormant for decades before being revived, there may yet be hope for the Emanuel Ungaro label.
Lindsay Lohan No Longer Involved With Ungaro (WWD)
Click HERE to view the Fall 2010 Emanuel Ungaro collection at Style.com
Previously:
More Unsurprising Departures: Ungaro Said To Be Shuttering Its Madison Avenue Boutique