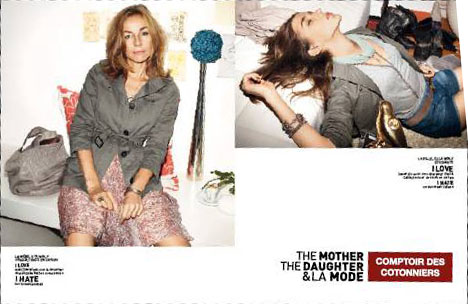 For all of you who are too old or too young (or too sane) to audition for Tyra Banks' America's Next Top Model, this Sunday, March 28th, Comptoir des Cotonniers will host its seasonal Mother-Daughter modeling competition in its SoHo boutique for the upcoming Fall 2010 campaign. The French chain (owned by Fast Retailing, parent company of UNIQLO) has long made mothers and daughters a theme in their advertising campaigns. The lucky winners will represent the brand for the season and be whisked to Paris to walk in the Fall Fashion Show on May 31st. Then they will be flown to whatever exotic location has been chosen to shoot the Fall advertising campaign. Flights, hotels and all expenses are included as well as clothing vouchers to use while shopping in Comptoir des Cotonniers stores.
So practice your signature walks. By next week, you could be a supermodel.
Comptoir des Cotonniers Mother Daughter Model Casting, March 28, 2010 from 2 to 6 PM, 155 Spring Street between Wooster Street & West Broadway, SoHo
Flyer and more information after the jump
CLICK IMAGE FOR A FULL SIZED VIEW 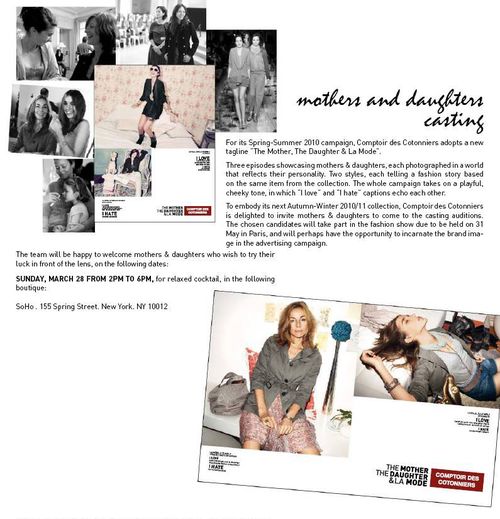