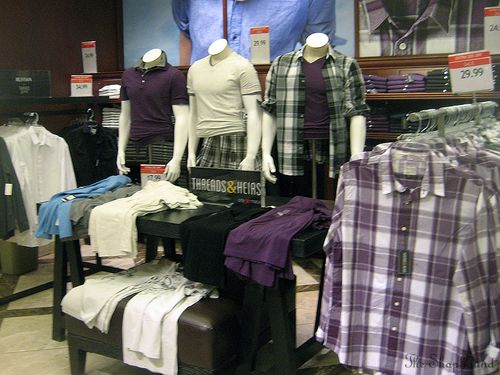 Macy's has been touting its new Threads & Heirs proprietary label as its first men's designer collaboration label featuring a portion of the line designed by Ruffian designers Brian Wolk and Claude Morais. Last week, the line appeared in its own corner of the enormous 34th Street flagship's main floor and 200 other locations of the mega chain. So will a collection by Ruffian be enough of a draw to get younger, more stylish men to go to Macy's? 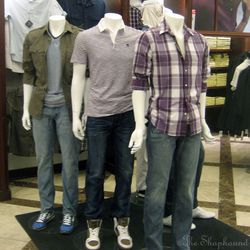 Ruffian who?
Well, that's part of the problem.
Here's the good part: The independent, young desigers at Ruffian are presumably getting a nice chunk of valuable income to invest in their company from this deal.
Unfortunately, even though Wolk and Morais initially started their business with menswear, as a small luxury women's brand, the Ruffian label doesn't mean much (or anything, really) in the moderate men's sportswear world, and the product we can see on the floor doesn't make a strong case for their re-entry into men's. It's hard for us to discern the designer's sophisticated signature aesthetic on Macy's main floor. Presented like most other the store's merch, plaid shirts have been crammed in the racks on cheap plastic hangers, and it all sort of fades into the rest of their men's offerings which are so firmly entrenched in the middle of the road. It's not aggressively unattractive, like Ed Hardy for example, but it doesn't look to us like anything you wouldn't otherwise expect to find at Macy's. It's just kind of blah.
Of course, so far we haven't seen anything to wear on the bottom half amongst the assortment of shirts and knits. Perhaps there are some fantastic pants still waiting to be delivered, but ultimately, we're not sure how the collaboration will do much for either Macy's or Ruffian. At best, it may popularize the designers among a customer that is wholly removed from its expensive ready-to-wear line. Wouldn't a collaboration on the women's side of the store have made more sense for everyone involved?
Threads & Heirs at Macy's Herald Square 34th Street between Broadway & Seventh Avenue and other locations.