Amalga Exits
With A Farewell Display 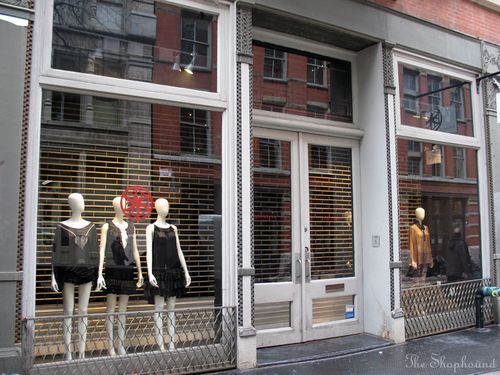 You might think that a favorable visit from Critical Shopper Cintra Wilson last year would have boosted the fortunes of SoHo boutique Amalga, but the Wooster Street boutique, formerly filled with relatively obscure but highly intriguing Japanese designer labels appears to have been shuttered.
Like a fallen Samurai, however, Amalga seems to have been determined to end its nearly three-year life with a degree of dignity. The store has left itself an elegant epitaph of several well appointed mannequins standing at attention in its windows, most unlike its fellow departed retailer, Operations, whose site has been left in a state of anguished disorder. We can't tell what lies behind the gate in the discreetly darkened store, but we can respect Amalga's effort to maintain its composure in the face of adversity.
Previously:
SoHo Departure: Operations Ceased,
Amalga Brings Japanese Exotica to Wooster Street (06.03.07)