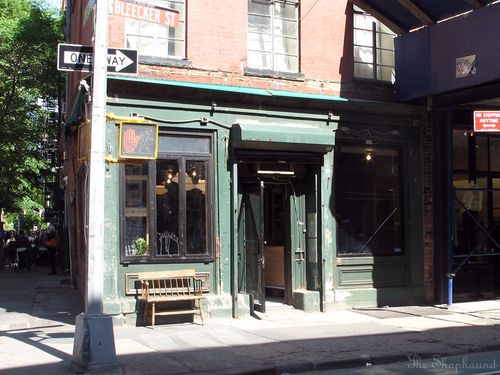 It's been a busy week on Bleecker Street with the arrivals of two men's stores, the imminent opening of a third and some news about possible newcomers to the small but ever more significant shopping strip.

A week ago, Freeman's Sporting Club took their madras shirts and hand tailored suits West to the corner of Christopher and Bleecker and deposited them in a long empty bodega that, from the looks of things, is still being finished. They must have been up all night, because when we walked by the day before, they were still sawing and hammering away, and by Friday, the doors were open and the goods were stacked on freshly constructed shelves of unfinished pine. We are promised that an actual sign is on the way. 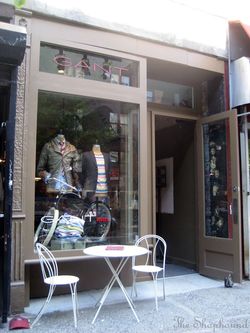 Freeman's fits nicely with its even newer neighbor, Gant Rugger (left) which opened yesterday in the former home of Gerry's which has been empty for like three years. Even gentrification haters should be relieved to see something fill up the narrow, deep space that is typical for the street. While their store is a bit more polished, Gant Rugger has a not unrelated vintage-y feeling with most of its stock based on pieces from the venerable brand's archives. Yes, there's more madras and khaki, which there just can't be enough of this season. We were warmly greeted in the store by someone we suspect was a Gant executive who quickly eroded away her gracious welcome by peppering us with questions: Were we familiar with Gant Rugger? Did we recognize it from shopping at Barneys? Do we live in the city? Where? What brought us in the store? Did we come for something special or were we just wandering around aimlessly?

We certainly expect to see an executive or two on opening day, but we dearly hope this person is not actually the store manager. In that case, we would suggest preparing an information sheet for her so you can avoid interrogation and shop in peace if you plan to visit Gant Rugger this weekend. Seriously, we wore Gant Rugby shirts for most of our childhood. We didn't really need an impromptu tutorial. Otherwise, the store is delightful.

In the next block, the plywood has come off the upcoming Coach Legacy Men's Store (below), and while the windows are still papered over, a brief glimpse through the doorway suggests that the store will be welcoming customers very soon -perhaps this weekend? The new brown awning will, of course, distinguish the men's shop from its girly counterpart next door.

Finally, yesterday's Wall Street Journal took a survey of the few empty spaces and still rising rents in the highly coveted shopping district, and casually dropped the names of a few stores yet to arrive there including, most intriguingly a new A.P.C. store. While no exact address has been announced, a prime candidate would be the former home of Les Pierre Antiques on the corner of Charles Street which has been available for around a year or so. Sadly, Les Pierre was one of the last of the original Bleecker Street antique shops, but its departure was probably inevitable at some point. Also coming is a new branch of the women's contemporary boutique PinkyOtto, Echelon Cycles, which as a pretty serious looking cycling and sport shop should add some variety, and surprisingly, Molly's Cupcakes, a Chicago based cupcake shop which apparently has the nerve to set up shop at the very epicenter of the cupcake craze and go head to head with mighty Magnolia Bakery on its own turf. Good luck to you, Molly! Get ready for a warm welcome from the neighborhood locals, or maybe picketing. Either one or both are an entirely possible scenario. 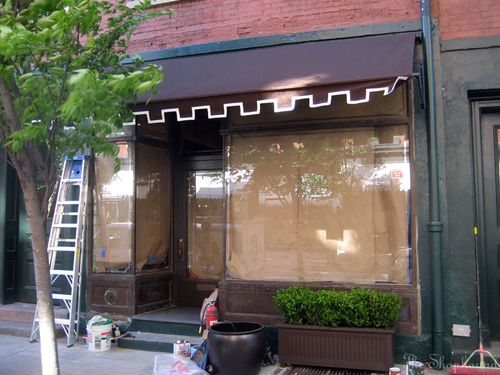