In Which We Feel Ambivalent About Oliver Peoples Replacing J.M.Weston 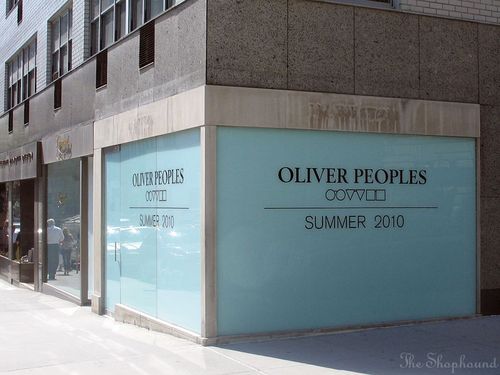 So, we noticed today that Oliver Peoples would be moving to a bright new space at 812 Madison Avenue at 68th Street sometime this summer, which is great because The Shophound loves ourself some sunglasses and the ones we love the most are from Oliver Peoples. We were all excited about that for a hot minute until the ghost of the former signage on the building reminded us that, until very recently (like a couple of weeks ago), this highly desirable corner shop used to be the home of  J.M. Weston's supremely elegant men's shoes.

You see, we love shoes about as much as, if not more than, sunglasses, and the ones we love the most...well, you get the idea.

We are hoping that Weston will be moving somewhere else nearby. Perhaps it is they rather than Michael Kors who will be moving into the swiftly vacated Emanuel Ungaro boutique, whose windows have just been papered over. Just don't tell us that they have packed up and moved back to Paris entirely. The Weston website still lists the location as its New York boutique, so if a new shop is in the works, it doesn't seem to have been fully planned yet.

Of course, if someone has to replace Weston, you could do a lot worse than Oliver Peoples who never has less than ten pairs of sunglasses on its shelves that we would happily take home. We just don't want to see Weston gone from the scene completely. Those classic shoes have more than earned themselves a place in the heart of New York's luxury district.