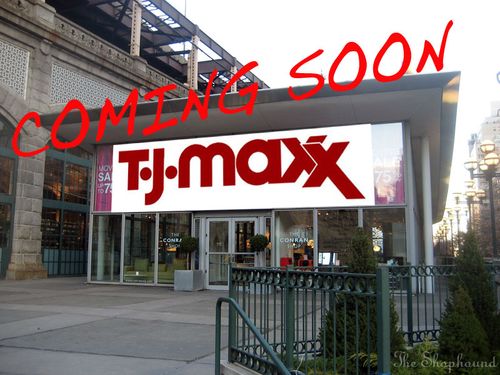 A Shophound tipster (Thanks, Al!) has kindly informed us that the former Conran Shop space next to the Queensboro Bridge will not sit empty for long. In fact there are two big banners in the windows that read: "Coming Soon: T.J.Maxx."

Is it something of a comedown after housing a sophisticated design store? A little bit downmarket for the dramatic glass pavilion? Maybe, but considering that there's an immense Bed Bath & Beyond just a block up the street of the bridge, it may very well turn out to be a more appropriate tenant for the location than its predecessor. This is the second new store in Manhattan that T.J.Maxx has announced (if a bit unofficially) in less than a month, and given the simply finished state of the site and the chain's general lack of elaborate décor it will probably be open long before the recently announced location at 57th Street and Eighth Avenue. Having recently opened a busy Upper West Side branch, the discounter is seriously increasing its presence in New York City.

It may turn out to be bargains that finally bring the shoppers over to First Avenue and 59th Street.

Previously:
Today In Discounters: Nordstrom Rack Gets Its Sign & TJMaxx Coming To Midtown