Leo Design Gets Booted Off Bleecker

Wilson Out As NYT Critical Shopper? 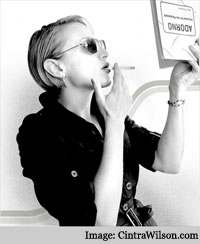 The Shophound has a sad face on today as it appears that, without a single byline in over a month, Cintra Wilson has been relieved of her regular duties as The Critical Shopper in the New York Times's Thursday Styles. The weekly column seems to have been fully turned over to full-time staffers Jon Caramanica, who took over reviewing men's stores after Mike Albo was dismissed, and Ruth La Ferla, a veteran Times fashion writer who has assumed Wilson's role.

Our guess is that The Times has chosen to limit its use of freelancers like Wilson in favor of its regular staff as a cost-cutting measure. After all, nobody is immune to the economic pressures currently facing pretty much all of print media.

It's The Times's loss, however, and we are quite sure that we are not the only ones who are jonesing for our bi-monthly dose of La Cintra's particularly critical form of shopping in which she does not suffer fools gladly, but is happy to swoon in appreciation of worthy accomplishment, especially if you serve her some Champagne. She managed to successfully follow up Alex Kuczynski's loopy, tangent-filled reports and shifted the column to her her own incisive point of view, at least for a while.

Of course, The Thursday Styles is not her only outlet, and we will be keeping an eye out for her work in other publications, and if you are in need of an immediate fix, you might check out her books, Colors Insulting To Nature, Caligula for President: Better American Living Through Tyranny and A Massive Swelling: Celebrity Reexamined as a Grotesque, Crippling Disease and Other Cultural Revelations.

Perhaps all is not lost. For all we know, this may just be a temporary experiment being carried out until the Thursday Styles editor realizes that Wilson's fee is money well spent. In the meantime,