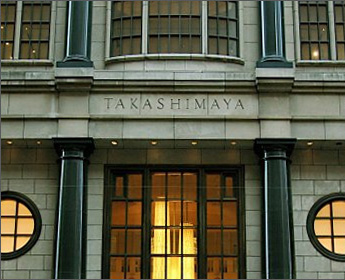 If you haven't made it over to Takashimaya's closing sale, then this weekend is probably your last chance to have a selection of anything worthwhile. The discount remains at 40% for now, and while the store has projected a closing date in early June, it hardly seems likely that there will be anything left by then —although some stores have been known to drag on for weeks selling dregs.

The second and top floors have already been closed off at the Fifth Avenue store, and sections of the remaining floors have been cordoned off as delivery staff have begun carting away cases and furniture —most of which appear to be priced and available for purchase. Takashimaya furnished itself with antiques, including the display cases, and there may still be some good buys to be among the fixtures, if you don't mind a few nicks and scratches. There were still a few good items left in the store this afternoon, especially on the home floor where we saw enough flatware from Ercuis and Alain Saint-Joanis to make a small, complete set, as well as a few complete place settings of the store's elegant Limoges china. The rest was mainly odds and ends.

The floral department, which may turn out to be the store's most missed, has been relocated to the main floor (where it was when it opened) and there are still some great vases and other containers left displayed in the atrium.

As a store, Takashimaya has done an exemplary job of maintaining its dignity throughout a most undignified process. Hopefully whatever takes its place will be able to live up to the example.