Takashimaya Building Sold
Store To Hang On Through Saturday 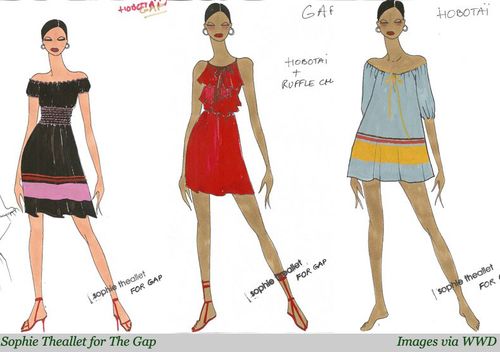 It's that time of year again when the Gap collaborates with the winners of the CFDA/Vogue Fashion Fund for limited edition capsule collections. This year's honorees include Grand Prize winner and Obama favorite Sophie Theallet and runners up menswear designer Patrik Ervell and jewelry designer Monique Péan. 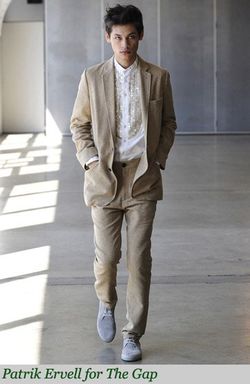 In the past, the Gap has given the designers a classic item to interpret (think of Doo.Ri's and Thakoon's white shirts or Vena Cava and Alexander Wang's Khaki collections in years past), but this time around, they were given more leeway to create collections that reference their signature styles. Theallet has made new interpretations of her now famous color blocked dresses in less expensive fabrics, while Ervell promises, “I’ve boiled archetypical men’s garments down to their essence.” Péan has designed 12 jewelry styles in eco-friendly materials including naturally shed buffalo horn, coconut, buri twine and organic cotton. WWD reports that the lines will launch today at the Gap's concept store on Fifth Avenue and 53rd Street and other locations.

And now the disappointing news: While the collections will be substantially less expensive than the designers' regular offerings, they are also substantially more expensive than the Gap's, a change from previous editions of the program. Theallet's pieces will run from $148 to $248. Ervell's railroad stripe denim jeans will ring up at an un-Gaplike $248, and Péan's pieces look to fall in the $200 to $300 range. It's a bit more than we are used to seeing charged for these collections, but the lines are that much more ambitious in scope and, presumably, quality this year, so it's kind of a trade off. They are still not exorbitant, but seem to have been lifted out of the fast-fashion price range that is always so appealing.

The launch has flown a bit under the radar this year without the usual pre-announcements or expensive photo campaigns. Perhaps they are meant to piggyback on this weekend's CFDA Awards ceremony for publicity, but the low profile may work in your favor. Get to the store fast before the crowds catch on, and you'll have first pick. We are betting that the Sophie Theallet dresses, even at their higher prices, won't be around for long.

UPDATE:
We visited the Gap Concept Store this afternoon to get a firsthand look at the new collections, which clarified a few things for us. One of the reasons why Gap has not promoted this program as heavily as they have in the past is because it will not be sold throughout the chain as it has in the past. In fact, the collections will be available only in the Fifth Avenue shop —not even online.

In fact, rather than having Gap mass-produce the special items in their offshore factories, the designers handled production themselves (mostly in the U.S.), and the clothes bear their own labels, not the Gap's. That is why the prices are higher, but then so is the quality, and Ervell's pieces all contain discount cards in various pockets for his own online store.

Salespeople told us that for the lack of advance publicity made for a sleepy first day, except for strong demand for Monique Péan's jewelry thanks to an item in today's New York Times as well as coverage in the latest issue of InStyle. Once word gets out, however, we fell sure that Sophie Theallet's line will sell briskly, and Partrik Ervell's customers will surely be interested in adding a few basic pieces at gentler prices. We'l see if these limited collections will last until July when the shop will be turned over to the Gap's next event. 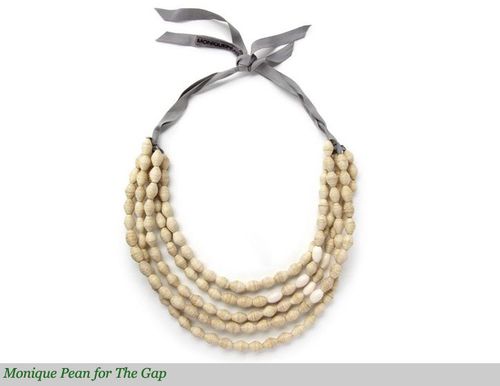 Necklace already on ebay for $499