Urban Outfitters Passes Up A Real Vintage Storefront For Fake Ones

A&F Quarterly Returns!
Can It Save Abercrombie & Fitch? 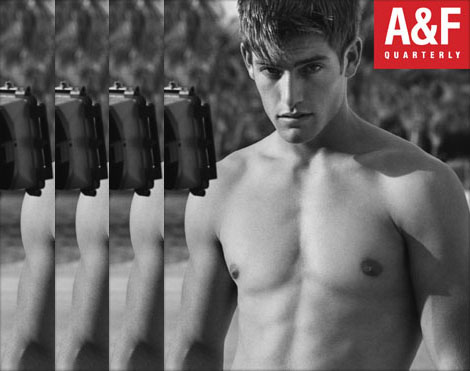 Last week Abercrombie & Fitch announced the return of the A&F Quarterly, the chain's infamous "magalog" featuring lots of attractive, young models with not enough clothes to go around, that helped to reposition the once venerable sporting and travel outfitter as a wildly successful youth-oriented sportswear retailer.

Fans may remember that the lavishly produced publication was sadly suspended in the U.S in 2003 when the constant protests against the racy content and sexy Bruce Weber photographs became too overwhelming to ignore, and producing the book became more trouble than it was worth.

Now that the chain's sales have stagnated at a dangerously low point, however, it seems that measures must be taken to correct it's wealened condition, and rather than rethinking and updating the stores' merchandise, advertising and interiors, the folks at Abercrombie have decided (apparently in the spirit of their unchanging merchandise) to bring back something people used to like around seven years ago... because that always works. Also, after years of stories about how dreadful their stores are to work in and settling numerous lawsuits regarding discrimination and hiring practices, they probably remembered that they really don't care if they offend anyone.

Listen, Abercrombie & Fitch has given us hours of laughter and a considerable amount of material over the years. It, and its little brother Hollister, have become, without question, ridiculous stores, but one thing we had never complained about was the Quarterly. It gives us all the sexy Bruce Weber pictures without our having to actually go into an Abercrombie store and endure the noxious colognes they pump into the air or the ridiculously loud soundtrack of circuit music too cheesy for even the tackiest of gay bars. We don't for a minute think that resuming its publication will help turn around the chain's fortunes. In fact, its return simply proves that the company as it is being run right now is totally allergic to new ideas. That, however, won't stop us from enjoying it while it lasts. See you on the 17th!