Michael Kors On The Move
To Bleecker

Takashimaya's Former Storefront
To Be Erased 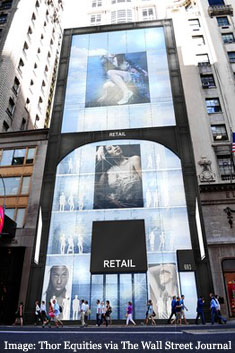 Disturbing news comes from Thor Equities, the new owner of what was the Takashimaya building. The Wall Street Journal reported this week that the much admired Japanese retailer's former home, built in 1993, is too customized to attract a new tenant without extensive remodeling both inside and out. Thor is reportedly planning to keep the first eight floors as retail space and dramatically expand the main floor, but they will also dismantle the elegant marble and limestone front façade and replace it with eight stories of plate glass and metal (rendered at right).

Apparently, making the building uglier will make it more appealing to other retailers. Never mind that it was designed to harmonize with older limestone townhouse style buildings nearby that characterize midtown Fifth Avenue, Thor's CEO Joe Sitt will take advantage of the fact that the building is not landmarked and can be altered with few pesky approval proceedings.

Retail specialist and Prudential Douglas Elliman broker Faith Hope Consolo, who never met a media outlet she wouldn't speculate wildly to, suggests three big names to the Journal who might be interested, London's Harrod's and Harvey Nichols, or possibly Nordstrom. Never mind that the two British stores have thus far shown no recent interest in crossing the Atlantic and seriously entering the New York retail market that we have heard of. As for the famously choosy Nordstrom, they have walked away from countless sites in Manhattan that are far more suitable to their requirements, and are about as likely to open shop in a narrow eight story townhouse space as they are to launch a branch in Tehran. So much for Faith.

For his part, Sitt is looking to broaden the search to include European luxury brands and Abercrombie & Fitch or Uniqlo-type chains in the market for a midtown mega-flagship, and is offering the building's naming rights to whoever lands in the space. Is there anyone left in these categories who isn't already sufficiently represented on Fifth Avenue?

Hearing about this makes the Shophound think of the innumerable once beautiful old buildings in Manhattan who over the years have had their lower levels gutted to attract retail tenants, leaving the façades in a jarring, Frankenstein-like state that hints at their former refinement. The banal but thankfully soon to be restored Third Avenue face of Bloomingdale's is a prime example of this sort of architectural offense. Whether Takashimaya's relatively recent, ersatz Beaux Arts-ish façade is worth protecting is a mater of opinion, but destroying half of it and installing an incongruous replacement does nobody any aesthetic favors.

On Fifth, a Facelift to Attract a New Retailer by Craig Karmin (Wall Street Journal)