Is It The End
For Macy's Wooden Escalators? 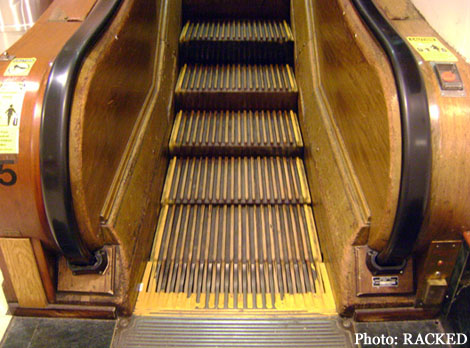 If you can bear the crowds and crush, there are still a few things to enjoy about Macy's Herald Square flagship, like the still majestic art deco main floor on the Sixth Avenue side of the store, or the extensive, occasionally bargain filled linen department. Then there are the famously quaint wooden escalators that clack between floors. Dating from 1927, they are the only wooden escalators we have ever seen, and probably among the last ones in operation anywhere, but they might not be around for long. Apparently, a four year old child accidentally sliced off a finger on one of them over the weekend, and as horrible as that may be to contemplate, it's not the first time. In fact, small children have had similar accidents in 2005 and 2006. While the full results of the most recent victim's re-attachment surgery is yet to be determined, his mother is on a justifiable crusade to have Macy's antique escalators moved to a museum.

Can you blame her? We are all for preservation, but there are surely tons of good reasons why nobody has made escalators out of wood for decades. When small children are losing fingers, isn't it time to rethink? After New York City's Buildings Department issued a violation, the offending escalators have been put out of use for the time being, and Gothamist suggests that escalator violations have quietly been a chronic and expensive problem for Macy's in recent years.

With the immense flagship store set to undergo a desperately needed overhaul over the next four years, it would seem to be time to replace those period pieces with ones less likely to lop off children's fingers, if only to avoid the inevitable, unwinnable lawsuits.