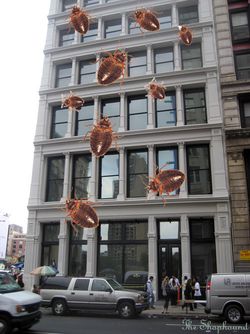 Now, bedbugs, as any self respecting NYC apartment dweller knows, are no laughing matter...except maybe in this case.

Apparently, the giant "Epic" Hollister in SoHo has been closed to rid the building and its contents of a particularly severe bedbug infestation. It had gotten so bad that employees (who are typically expected to wear flip flops this time of year) were getting bitten, and finding bedbugs and their exoskeletons on their clothes!

We are told that the three shirtless models who normally stand outside and welcome customers are currently informing them that the store will be closed for a few days.

According to Gothamist, workers have been complaining about the bugs for weeks, and were brushed off by management until today. Evidently, nobody at Hollister HQ fully understood exactly what a scourge bedbugs can be, and probably only figured out yesterday that having a store infested by bedbugs meant that customers buying clothing there could easily transfer the infestation to their own homes —leading to the inevitable lawsuits.

Of course, knowing their priorities, those folks at Abercrombie & Fitch also probably realized that their fresh faced Hollister sales staff wouldn't look so cute covered with bug bites, and since bedbugs feed only at night, you can imagine how much fun they were having in a store that is kept as dark as a vampire's lair at all times. Oh, the stupidity is mind boggling.

The store is reportedly expected to re-open in a few days, which sounds like wishful thinking, but we are willing to bet that more than a few businesses on that block of Broadway are taking a good look around to make sure that the infestation has remained contained.