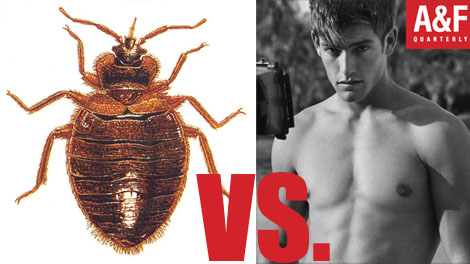 We like to think of Abercrombie & Fitch as a gift that keeps on giving, but to a bedbug, apparently, they are just lunch.

After having closed its Hollister Epic Flagship on Wednesday for a persistent bedbug infestation, the chain had to turn around and shut the Abercrombie & Fitch location at the South Street Seaport on Friday for the same reason! Is there a connection? The stores are miles apart, so it would seem unlikely, but it certainly is kind of funny, especially since the company appears to be handling the situation by following the leading life rule of one Suzanne Sugarbaker: "The man should kill the bug!" The man, in this case, would be the Mayor Bloomberg.

According to The Wall Street Journal, A&F Chairman and CEO Michael S. Jeffries has actually contacted the Mayor for "leadership and guidance" on how best to address the problem of "the growing infestation of bedbugs in New York City." As any New Yorker can guess, the the Department of Health and Mental Hygiene responded by basically saying, "Not my problem, dude."

We know, HILARIOUS, right? As if the Mayor has time to offer suggestions to every building that has been hit by bedbugs. Truly, such an infestation is a miserable trial that The Shophound wouldn't wish on our worst enemy (okay, maybe our second-worst enemy), but there's something appropriately karmic about a company that gleefully flouts all kinds of workplace safety and fair hiring practices having to turn to the city to help them out of an embarrassing situation. Abercrombie says that the Hollister store should have been ready to be reopened by Saturday, which sounds like wishful thinking for a building that size, especially one filled with clothes and overstuffed furniture.

As always, we wish the folks at Abercrombie the best of luck with their problem, and thank them for the material.

Posted at 01:24 AM in Abercrombie & Fitch, Financial District, Things Not To Do | Permalink | Comments (0)