The Shophound At CAPSULE
Part I 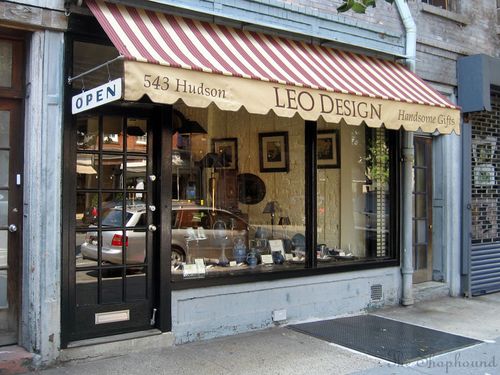 A couple of months ago, we were disappointed to announce that Leo Design, one of The Shophound's favorite antique and gift shops in the city, was being unceremoniously turned out of its longtime Bleecker Street home. They have found a suitable nearby home, and for a little while, both locations appear to be open for business (or at least they were last Sunday). Ultimately, Leo will wind up at 543 Hudson Street between Perry and Charles Streets, and at the moment, the store's merchandise is leisurely migrating over there while its original home at 413 Bleecker empties out. Offsetting the bad news that the much admired store is being forced from a desirable, highly trafficked location is the fact that its new home is substantially bigger. While Leo was too immaculately kept to ever be considered cluttered, the store was tightly packed with goods, however beautifully presented. Its new home is roomy —even sunny— so customers will have an easier time seeing all the beautiful vintage American and French pottery that gives the store its unique character. Come August, Leo should be fully ensconced on Hudson Street, and though a forced move is always cruel, more space may turn out to be a blessing in disguise after all.