Does Your Local Duane Reade
Look Like This? Part II

What To Make Of Limoland? 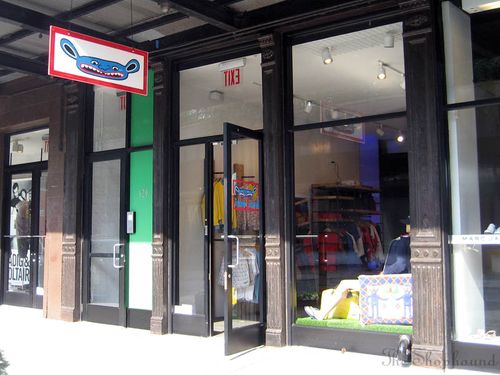 We stopped by the new LimoLand sportswear boutique on Washington Street yesterday, and standing amongst the brightly colored polo shirts and shiny track jackets it occurred to The Shophound that the merchandise looked more like an attempt to start a "Bathing Ape" type cult label than an expression of actual fashion ideas.

Invented in 2007 by venture capitalist, philanthropist, photographer, art collector and all-around rich person Jean "Johnny" Pigozzi, each item in the collection is marked by an appearance of the brand's mascot and logo, Mr. Limo (at right), inspired by the late Tanzanian artist George Lilanga. The brightly colored polos and hoodies look imported from the kid's department, which is a look, but more importantly, mainly seem to exist to provide a showcase for that all-important logo. Can a cult label be so easily engineered, and if so, can it be done by a middle aged French-born entrepreneur whose various pursuits send him jumping from continent to continent? The folks at influential stores like Colette and 10 Corso Como seem to think so, though we remain somewhat unconvinced. It must be said, however, that The Shophound has never been exceedingly enthralled with BAPE-style cult labels, which often seem more like an exercise in manipulating a targeted customer base than actual creative design. An accessory collaboration with the Japanese brand Yoshida Porter, another label with a cultlike following, suggests that credibility is being sought through alliances with other brands. The store itself with its Astroturf mats and industrial cast iron shelving blends the requisite elements of camp and functionality, and in all fairness, the merchandise is not entirely unappealing. One has to wonder, though where the brand goes after polo shirts and track jackets? Will Kanye West and Pharrell get excited about it and Tweet it into popularity? After crocodiles, Polo players, Fred Perry's wreath and any number of other insignia, is there room in the collective consciousness for yet another another appliqué on polo shirts?