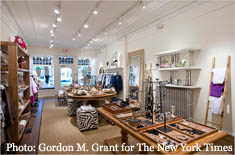 In case you thought that the Thursday Styles Critical Shopper column was meant to cover after the latest and trendiest retailers to open their doors, Ruth La Ferla is here to disabuse you of that notion with a visit to Chico's. Well, it's Chico's in the Hamptons, but still...
Chico's.

In fairness, a person could certainly do worse than Chico's, but, especially in the Hamptons, it seems a person could also do better. Part of the problem is that the store reminds her of Elizabeth Taylor not at her ravishing peak, but as she began to slide into slightly blowsy bohemianism. To help her navigate, Ms. La Ferla enlists Irene, a friend who is perhaps even more steeped in fashion than herself, which seems to be the latest thing for Critical Shoppers who can't seem to deal with these stores alone anymore.

Irene next slipped on a demi-sheer tunic, all swirling paisley on a purple ground. “Pretty,” she deemed it, but, on second thought, “maybe a little too mother-of-the-bride.” A chambray shirtdress struck me as timely, if not downright trendy, until I dimly remembered Kate Jackson wearing its twin in a Lifetime movie-of-the-week.

Well, that doesn't sound encouraging, unless you are a Kate Jackson fan.

Ultimately, it looks like Chico's wants things both ways. It wants to cater to aging baby boomers while also keeping up with the tonier stores along main street like Ralph Lauren and Intermix. The question is how well are you going to do selling poly-georgette tops that recall Vera Wang to a customer base that would just as soon pay five times as much for genuine Vera Wang?