What To Make Of Limoland?

TODAY IN SELF PRESERVATION:

Barnes & Noble Puts Itself On Sale 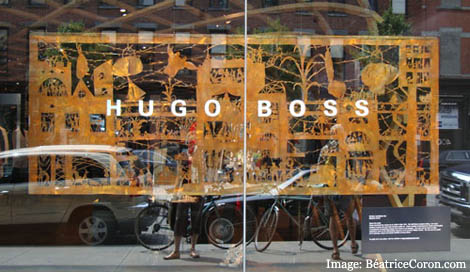 It's difficult to show in a photograph, but its worth taking a trip down to Hugo Boss's 14th Street boutique for a look at Béatrice Coron's intricately cut and painted Tyvek panels called "Hooks & Hookers", depicting the history and mythology of the Meatpacking District. Subjects include, according to the artist's website, "voyeurs, artists, decision makers, writers, readers, posers, lovers, shoppers, patrons, computer addicts, carnivores, party-goers, bikers, cyclists, New Yorkers and tourists. Among the scenes, there is a shepherd on the high line, a cow swims at the Gansevoort Hotel, an Egyptian cow is at the Standard Hotel, an angel is partying, and a Hugo Boss patron has a leashed piglet."

We can get behind pretty much any artwork with that point of view, which should be plenty entertaining to anyone who can remember the grittier days of the Meatpacking District. The artworks were listed as being on display through July 12th, but as of Monday, they were still there, so be sure to stop by on your way to pick up an iPhone.