TODAY IN SELF PRESERVATION:

Barnes & Noble Puts Itself On Sale 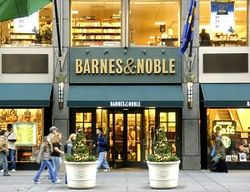 Is this the end of the giant superbookstore? Are bookstores already going the way of record stores?

A couple of decades ago, there was much distress over the sad fate of the corner bookseller as a New York institution when Barnes & Noble began to roll out superstores across the city. In neighborhood after neighborhood, independent booksellers folded as the giant 2, 3 and 4 level stores staked their claims at prominent locations. Now, facing the rapidly growing threat of electronic books, The Wall Street Journal tells us that Barnes & Noble is putting itself up for sale. While the chain which, including its college bookstores numbers over 1,400 units, is not yet in the red, its profits and stock price have slid dramatically over the past few years. It has been slower to invest in the electronic book market than its chief rival Border's and the obvious competitor in the market, the mighty Amazon.com.

Speculation centers on a purchase by a private equity group, though the company's Chairman, founder and largest stockholder Leonard Riggio is reportedly forming an investor group to acquire the company he built and took public.

Whoever winds up with Barnes & Noble will probably reconfigure it to some extent, which could leave some large and highly desirable parcels of retail real estate available. You can look at it as yet another reduction in the number of  the city's bookstores —or think of it as a possible increase in the number of suitable places where Topshop or Uniqlo could open.