Cart Before The Horse Edition 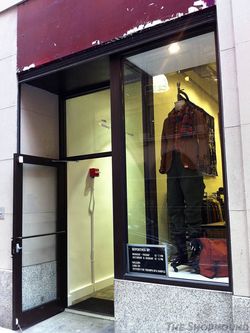 It's always a challenge for The Shophound to find a store that hasn't already been written up in ten other places, and, to be honest, we wouldn't have found Nepenthes if the folks at Valet. hadn't tipped us off about it's quiet opening during Fashion Week. You probably won't be stumbling across its doorstep either, unless you happen to frequent the blocks surrounding the Port Authority Bus Terminal.

Well, we usually don't either, but we found ourselves directed to the tiny shop that took over a tall and narrow union sewing shop without so much as a sign over the door to draw in customers. Clearly foot traffic is not the big expectation here, but Nepenthes is worth going a bit out of your way for.

Originally a menswear distributor in Japan, Nepenthes started developing its own brands, the best known of which is Engineered Garments designed by Daiki Suzuki which is carried in depth in the store including the women's collection called FWK. Despite the presence of the popular label, this is not a store that studiously clones the contents of Odin or Barneys Co-op, but has very much its own quirky personality. 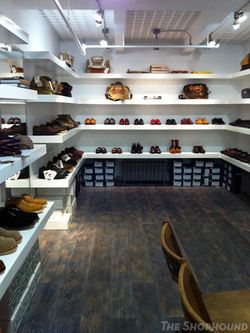 It's no secret that stylish Americans have long been looking to Tokyo for cues about the next thing we should be looking for to stay at the forefront of style. Nepenthes brings that sensibility right to you which is a good thing if you think your wardrobe is starting to look like it has been collected solely from industrial uniform suppliers. The fascination with utilitarian workwear continues, but here you will find new fabrics and inspired combinations for a far less literal interpretation. Upstairs, we found accessories and footwear including items from more self generated labels like Needles and South2 West8. Inventive details abounded here as well, like the upper of a Gucci-style loafer married to the rubber sole of a Maine handsewn blucher moc, or Birkenstock inspired clogs in pricey perforated shell cordovan. There are lots of options as well from cult brands like Mark McNairy and Tricker's as well as a selection of almost cartoonishly über-chunky work boots and heavy wool socks. Even the stodgy American shoemaker Allen-Edmonds gets a long overdue makeover that could push it into the ranks of newly desirable heritage brands.

Like so many stores, Nepenthes doubles as a gallery as well, and its high walls are currently festooned with quilted and embroidered hangings by the duo of Carrie Houseman and Darbury Novoselic known as A Bee.

Though the store is very deliberately off the beaten path, it's not totally hidden on the edge of nowhere. It is close to the big MUJI store in the New York Times Building and not at all out of the way if you are familiar with the sample sale locations at Soiffer Haskin and Clothingline. As much of its stock is actually made in the U.S., we are guessing that the location may have been chosen in part for its closeness to what remains of the Garment Center's manufacturers, another worthy reason to support the store. The best reason, of course, is that it's full of cool stuff which should be more than enough incentive to get you over there at your first chance.