Inside The Gift Bag

Cart Before The Horse Edition

THE TJ'S WATCH IS OVER:

What To Know About
The West Side Trader Joe's 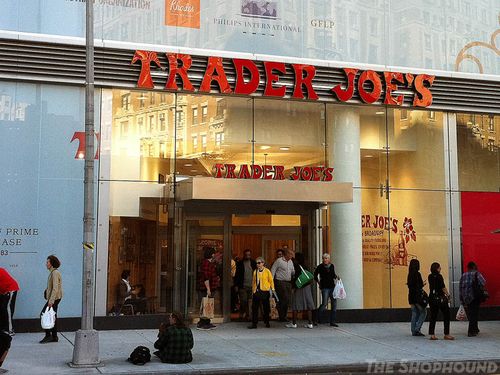 Our Trader Joe's watch is officially over here at The Shophound. After suffering with one overcrowded, undersized branch on 14th Street for so long, Manhattan has finally been graced with two additional locations in quick succession. A few months ago, you may remember us rhapsodizing over the new Chelsea branch with its spacious aisles and painless check-out lines. It was like they fixed everything that sucked about the other one to make it like the Trader Joe's of our dreams.

Apparently, some dreams are meant to be shattered.

Oh, after Chelsea, we had such high hopes for the new Trader Joe's at 72nd & Broadway that opened on Monday. It isn't a rage inducing maze of gridlock like the one on 14 Street, but neither is it like the pleasant, airy Sixth Avenue version at all. The store is entirely underground and divided into two levels —already a problem. Diary, produce and other refrigerated foods are on the upper lower level, and everything else is on the lower lower level. Both floors are arranged in a weird, L-shape, and it seems like the management is still not sure what kind of configuration the inevitable checkout line will take, but at the moment, when busy, it will stretch along the produce aisle, creating an annoying obstacle for anyone who just wants to grab some hummus or a bag of baby spinach, not unlike the chronic situation down on 14th street. Of course, there's one thing about the stores that is no fault of the folks at Trader Joe's. The Upper West Side comes with it's own indigenous menaces, and chief among them is a surplus of moms with strollers and various and sundry other kids scrambling around. West Siders will know what we're talking about, and that's not even considering the abundance of, God forgive us, old folks. We know. Elderly shoppers have just as much right to their frozen Chicken Tikka Masala as anyone else, even when we are tripping over them, but we all know the hazard they can present in a supermarket. We're not even judging the store on its madhouse opening day. Even somewhat settled down a day later, the place is still something of an obstacle course forcing a constant refrain of "excuse me" before you're done.

The crowd frustration is only reminiscent of its neighbor Fairway, famous for its combative shopping experience, so everyone in the neighborhood should actually be used to that sort of thing by now. Anyone who thinks that TJ's going to present some sort of threat to the mighty Fairway isn't really looking too closely at the two stores. Trader Joe's,while ostensibly a supermarket, is a great source of well-priced staples like peanut butter, but its big draw is the range of house-branded specialty items like frozen and packaged, prepared foods. It can't possibly compete with Fairway's fresh produce, gourmet cheeses deli, fish and meat counters or even its branded products, which are usually quite competitively priced. In fact, the stores complement each other more than anything.

On the plus side, while the new TJ's is not ideally configured, it makes up for a lot of its shortcomings with convenience, at least as far as far as The Shophound is concerned. Of the three Manhattan locations, it is the closest to us by far, though we have to admit that we may still occasionally go out of our way to the Chelsea store as well. We would rather have a sub-par, somewhat frustrating Trader Joe's nearby than not at all. 14th Street, however, we are totally done with.

And so ends our Trader Joe's watch. Now that there are three stores in Manhattan with another in Brooklyn, more local branches would certainly be welcome, but no longer particularly life-changing.