T.J.Maxx Takes Over With
A Double Header Plus A Marshalls 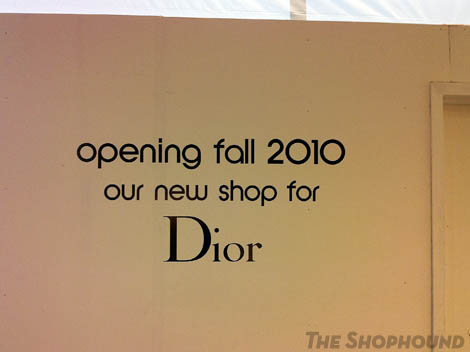 Though the massive overhaul of Bloomingdale's main floor designer accessory boutiques is only about halfway finished, the store is boldly positioning itself to take on its biggest competitors once it is done. The most impressive change will be the addition of major Prada and Christian Dior boutiques as well as the just-opened Jimmy Choo shop to the already heady mix of handbags on the Lexington Avenue side of the floor. This puts Bloomingdale's on a better footing to compete with stores like Saks Fifth Avenue and Bergdorf Goodman whose limited distribution arrangements with most luxury brands left the East Side favorite out of the loop, until now. A big, expanded Chanel shop recently opened alongside newly refreshed spaces for Ferragamo, Marc Jacobs, Fendi and Chloé.

While there was a time when Bloomingdale's would have been first place a a hot brand would want to be seen, the store's prestige took a critical hit during the recession of the 1990s when management made a decision to trade down and de-emphasize its high end assortments. While the store hung on to sterling labels like Chanel and Giorgio Armani, it lost its place in the pecking order for emerging brands and missed out on much of the status "It" bag business as the century turned. It has been a long, hard fought battle to rebuild the store's snob appeal, and the store's ongoing renovations appears to have helped convince picky vendors like Prada and Dior that it has the proper environment for their labels. Sharp-eyed shoppers will have noticed that earlier in the year, cluttery counters were removed from the Lexington Avenue entrances, giving the floor a more genteel, elegant feeling while more aspirational labels like Burberrry, Longchamp and Coach got kicked half a flight upstairs to the cosmetics level. That leaves the lower section as pure luxury player that will ultimately be anchored by Prada at one end and Louis Vuitton at the other.

We are guessing that the new accessory shops will be completed sometime before the Holiday season, so we should see the reults of the overhaul in a few weeks. Settled firmly in the city's wealthiest zip code, Bloomingdale's should now have a lot more enticement to lure back the nearby customers who abandoned it for tonier options years ago.