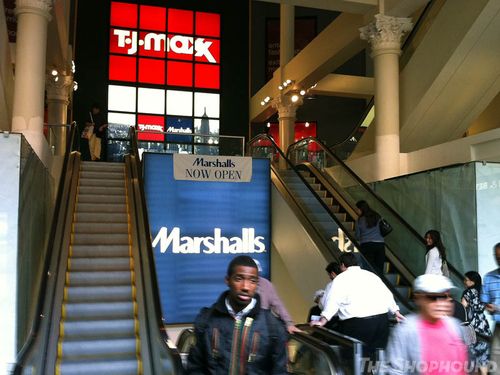 We have been trying to figure out what the difference is between T.J.Maxx and Marshalls, and the new Marshalls that opened yesterday in Chelsea as the second part of the TJX Company's three pronged assault on Manhattan's off/price discount market does nothing to demystify the issue for us. They are owned by the same parent company, and they carry the same merchandise —exactly the same merchandise. The main distinction between the new Marshalls branch and the T.J.Maxx that sits a few flights above it in the Siegel-Cooper Building at 620 Sixth Avenue is that that Marshalls has a greater proportion of apparel to housewares and home furnishings, and they also carry men's shoes. That's about it. If you are a T.J. Maxx fan, it's a good thing because you have another store to rummage through for bargains when you are finished upstairs. If you don't care about either one, you can easily ignore them both by going neither up nor down on the escalators outside of Bed Bath & Beyond. Basically everybody wins, and judging from the long lines at Marshalls registers yesterday, the company's business strategy for New York seems to be working. Next on deck, T.J.Maxx's Columbus Circle Flagship opening on November 11th. Just look for a big red shoe.