FASHION For ACTION Kicks Off
This Weekend At Housing Works 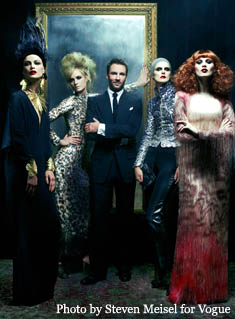 Have you been waiting like crazy to see what Tom Ford's women's collection looks like? No, we don't mean some sneaky editor's blurry iPhone pics, but real studio shots of the complete outfits. Wait no longer. Vogue.com has revealed the results of its Steven Meisel shoot of the highly protected collection. Sadly, there's no Beyoncé, Daphne Guinness or Lauren Hutton, but there's Karen Elson, Amber Valletta, Carolyn Murphy, Joan Smalls, Stella Tennant and others who participated in the first New York fashion show to generate real excitement in God only knows how long.

Vogue has four images online, and presumably more in the upcoming December issue along with the obligatory profile of Ford. As for seeing the collection on red carpets, the designer has promised to wait to see who gets nominated for an Oscar and offer to dress a single nominee of his choosing (so if Julianne Moore gets nominated for "The Kids Are Alright' —a distinct possibility— then we know how that's going to go).

We can't really argue with Ford's desire to slow the breakneck pace of the fashion media, even if it makes our job harder. To make matters even more frustrating, he promises to continue showing the women's line in the same way each season —but in London. The clothes are slated to start arriving in his stores sometime in December which is why they have been embargoed until this point. The photos snapped by Terry Richardson at Ford's presentation should hit the designer's revamped website at around the same time. Everything looks beautiful. It's not an earthshattering collection from these pictures. He's not reinventing the evening gown, but the line just looks appealing, rich looking and chic.

The man knows his customer.

Click the image to go to Vogue's story and slideshow for full-sized images.

Mr. Ford Returns by Sarah Mower (VOGUE.com VIA The Cut)