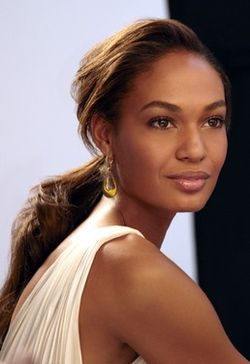 For years, an Estée Lauder contract was one of the modeling industry's biggest prizes, given to a single model who would typically represent all the company's by herself. In the past decade, however, the brand has multiplied the roster, and announced this week that Puerto Rican born Joan Smalls (pictured left in an official image) will join the brands lineup. This is significant not only because the Lauder contract remains a plum achievement and Smalls is a beauty whose career ignited in 2010, but also because the company has been without a model of color since Liya Kebede's contract expired a few years ago.

Smalls, as well as newcomers to the brand Liu Wen from China and Constance Jablonski from France, joins longtime spokesmodels Carolyn Murphy, Elizabeth Hurley and main face Hilary Rhoda at Lauder. Her addition finally allows the team of models to represent a fuller spectrum of beauty than it ever has —something that the company, which has grown to be an enormous force in the beauty business, has been slow to do in its flagship brand.