MYSTERIES OF THE UNIVERSE:

It Must Be Christmas Because
The UGG Line Is Here

Another Sample Sale Gridlock Is Upon Us 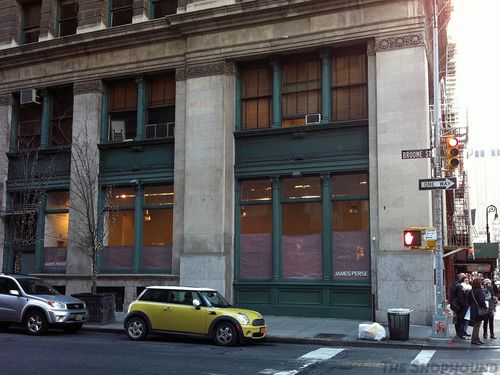 California T-shirt titan James Perse looks like he's about thisclose to opening his newest boutique in the corner shop at 60 Mercer Street at the southeast corner of Broome Street where Operations once fought valiantly for survival. We aren't worried about Perse's prospects at all. He already has a loyal following and new additions like Isabel Marant and Jérôme Dreyfuss have made the once slightly dodgy Broome Street a much more favorable location for boutiques.

This new store, however, brings Perse into the company of Reiss, Ralph Lauren and RRL, Intermix, Zadig & Voltaire, Burberry, A.P.C., Michael Kors, Comptoir des Cotonniers, 7 For All Mankind and even Sunglass Hut as retailers who are duplicating their efforts both in SoHo and on the not especially far away Bleecker Street. Hand-wringing about gentrification aside, the new fancy Bleecker was, at least at one point, a collection of relatively exclusive shops which were worth going out of your way for if you could afford to. Now that its real estate is among the most expensive retail square feet in the world, it is becoming a carbon copy of so many other shopping areas in the city. Even the reviled Magnolia Bakery has other line-free branches throughout the city now, so we are beginning to wonder if Bleecker Street's own tenants are starting to render the costly location obsolete?