Will Etro's SoHo Boutique Ever Open?

MYSTERIES OF THE UNIVERSE II:

The UGG Line Is Not
Restricted To SoHo 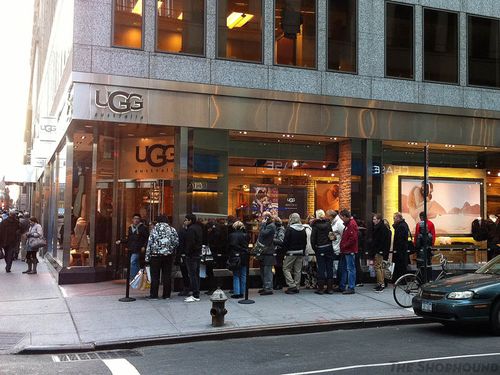 Some days ago, we remarked that the line of Holiday shoppers has rematerialized in front of the Ugg Store in SoHo, and a lot of folks seemed to appreciate that. We would be remiss in ignoring the fact that the new UGG store at Madison Avenue and 58th Street has also spawned its own queue of customers shivering in the cold. See the above image from Monday, December 20th at 3 PM. We were not kidding when  we said that there are nearly 80, EIGHTY places in the immediate vicinity that sell UGGs (they are listed on the company website), making the above lineup all the more ludicrous. Even forgetting for a moment the fact that these people are waiting in line to take part in one of the world's most unflattering fashion trend, there is still no reason to do this! You can get those damned things anywhere.

And people wonder why New Yorkers seem so aloof towards tourists. Sometimes they make it so easy.

Previously:
MYSTERIES OF THE UNIVERSE: It Must Be Christmas BecauseThe UGG Line Is Here