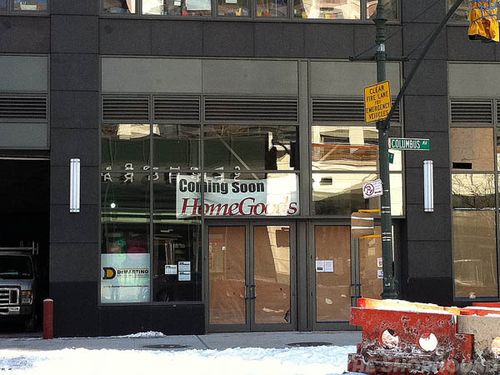 We heard last Summer that Home Goods was coming to the Columbus Square retail development (we hesitate to call it a strip mall, but with TJ Maxx, Modell's and Michael's...). It will be the final component of TJX Companies' recent initiative to entrench its big box chains in Manhattan. At the time, the store was projected to open during the first quarter of this year, but the space is still pretty raw looking, and the company has only just put up its "Coming Soon" banner. We can't tell when it's going to open, but they have a a little over 26,000 square feet to finish, so we'll be surprised if it's done before the end of March.

What we do know is that the store will be at 795 Columbus Avenue, somewhere between where 98th and 99th Streets would cross, directly across the street from TJ Maxx, its sister store. This will be New York City's second branch of the Home Goods, after the one on Staten Island (which we don't totally count —no offense to S.I.ers). For those who are unfamiliar, it is essentially, just like Marshalls or TJ Maxx without all the clothes and accessories. That means it can be either a cavalcade of fantastic kitchenware, bedding and home furnishings bargains, or a giant collection of sad, picked-over off-price merch depending on which day you hit it. You may think that Manhattan has already got more than its fair share of big-box stores, but The Shophound has had some awfully good luck at TJ Maxx's home department, so we're guessing that whenever Home Goods opens, it will be drawing even more shoppers to the upper reaches of Columbus Avenue.