Quest For The Detested Edition

Our Favorite J.Crew Takes A Hiatus 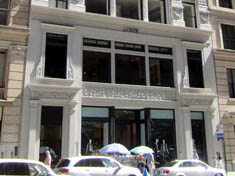 If you notice that the big J.Crew on Lower Fifth Avenue has been shuttered, don't fret. It's only temporary. Our friends at Racked tell us that the store is undergoing an expansion that will make it even bigger. Menswear will move up to a new third floor, and the Women's space will be expanded while a new section for the kid's Crewcuts brand will be added as well. It sounds like this branch may wind up as the biggest J.Crew in the city, which is OK for us. It is our preferred location, with a much bigger selection than Columbus Circle, but without the tourist crowds you can't avoid at Rockefeller Center. As much as we admire their curated men's stores on Madison Avenue, SoHo and Tribeca, they generally opt out of the big sales, which is when we like to stock up on our J.Crew stuff.

After this Friday, the store will be closed until the end of February, but it sounds like this will be a re-opening worth waiting for.

The Flatiron District's J.Crew Closes for a Little Nip and Tuck (Racked)