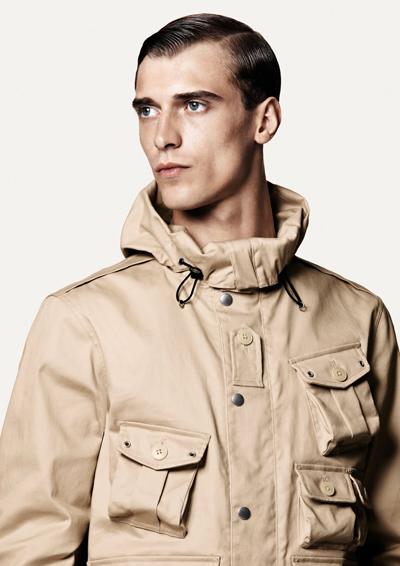 The first image from Jil Sander's Spring 2011 +J collection, the designer's fourth for UNIQLO, has trickled out. As usual, the collection has been kept under wraps, but this multi-pocketed hooded windbreaker suggests a utilitarian/military look for Spring. The assignment is now considered a plum job for models, and it looks like Sander's man for spring is French-born Clement Chabernaud, so congrats to him.

We don't expect the line to arrive in SoHo's UNIQLO flagship for several weeks, but for if you are slim tiny person, what's left of the Fall 2010 line is now on sale there. The selection mostly consists of smaller scaled Japan Size replenishments. The fall line sold particularly quickly, leaving only some coats, a few trousers and white shirts in the shrinking men's section only a week after its release. Hopefully, Spring will bring a more plentiful inventory, and as always, we are keeoing our fingers crossed for a more inclusive size range.

I can hardly wait till the Spring/Summer +J colection is launched. Ther's going to be so much stunning women's clothing I won't be able to choose just one item to start off my Summer wardrobe!